A Greenprint Is Our Most Important Statement About Memphis’ Future 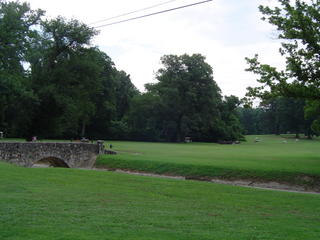 “Greenprints,” as Will Rogers of the Trust for Public Land said on Smart City, is a smart growth strategy emphasizing land conservation to improve quality of life, clean air and water, offer more recreational opportunities, improve personal health and contribute to the economy.

He says that greenprinting is a voluntary approach designed to steer growth toward existing infrastructure and away from sensitive water and land resources. The traditional approach, in his mind, has been piecemeal and reactive, often lacking a larger conservation and growth vision. Greenprinting puts plans for open space front and center in the same way that it does roads, schools, and public works projects. Greenprinting says we care more about greenspace than asphalt.

Few cities have what Memphis has. It has parks that are signature parks, each in their own right. Shelby Farms Park. Wolf River Greenway. Overton Park. Riverfront development. Riverside Park.

Separate, they are just isolated projects and plans, but together, they become a “green strategy” that is all about place-making. It’s not about projects any longer, but about vision. It’s about visualizing the big picture, rather than isolated parts. It’s about sending a national message about being progressive and bold.

Memphis has done it before. A century ago.

According to the Tennessee Encyclopedia of History and Culture, “The Memphis Park and Parkway system resulted from the vision of new civic capitalists who emerged in the wake of the yellow fever epidemics of the 1870s. In 1895, these well-educated, well-traveled, and prosperous capitalists established the Greater Memphis Movement (GMM), a loose organization devoted to the promotion of a progressive civic agenda that included…construction of a system of parks and connecting boulevards to unite the new city with the old.”

The planning invokes the revered name of Olmstead, but here, it was John Olmstead, son of the world-famous Frederick Law Olmstead Sr., landscape architect for Central Park in New York City and Biltmore in Asheville. His son, John Olmstead, designed an alignment of a proposed parkway in Memphis to connect two park sites, one on Riverside (Cow Island) and another on an old farm tract known as Lea’s Woods.

The Wilderberger Farm on Cow Island Road became Riverside Park and Lea’s Woods became Overton Park. In addition, Memphis redesigned and developed three of the four original 1819 city public squares, the design of new small urban parks and the design of a parkway that would connect these parks and spur development.

Memphis should do it again.

The opportunity to tie the projects that are now under way into a cohesive vision of Memphis’ future gives us the chance to make a national statement about our city. As Peter Harnik of National Trust for Public Land said while in Memphis to speak about the potential of Shelby Farms Park, Memphis needs to package all of its individual projects into a “greenprint” that leverages all of them into a statement about the way we see our future and our investment in outdoor recreation and healthy communities.

As the New York Times said in an editorial, parks are a city’s lungs and make it a better place to live. City Parks Alliance says parks are the social fabric for a city. And yet, parks are often the first to have their budgets cut and the last to have them replaced.

The need for is clear. The work on greenprinting needs to begin now. Memphians are crying out for better parks. It seems like the perfect time to create a revival of the city parks movement that Memphis led in the late 19th century.

Just as parkland helped catapult Memphis onto the national stage a century ago, it can do so again today. It’s never been more needed.

Send Us Your List Of 10 Things You Love About Memphis