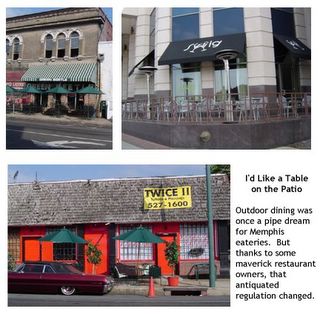 It’s hard to believe that it wasn’t too long ago that was in the dining dark ages. In those days, Memphians looked with envy at those centers of sophistication which actually let diners eat outdoors at their favorite restaurants.

Back in the 1980’s, leaders of the Memphis Restaurant Association – Thomas Boggs of Huey’s fame and Mike Warr, former restauranteur now doing a great job of heading the Porter-Leath Children’s Center – lobbied city and county governments as if they were K Street lobbyists in D.C.

Their revolutionary request: permission to have outdoor dining in .

There was also another request even more monumental to the future of the city — allowing people to eat barbecue from the booths at in May’s World Championship Barbecue Contest and allowing the booths to remove the screens which separated the cooking area from the public.

Each year, when the weather warmed up, so did the two restauranteurs. They held meetings with anyone in local government who would listen (and some who wouldn’t). They asked questions like whether it is that much more unsanitary in than other cities and what health risks were floating the air outside restaurants. The answer was always the same: it’s the health code and it’s not going to change.

The extremely stringent health code was a legacy of the Yellow Fever epidemics, and the standing water in the bayous were now under ground, but the law is the law, they were told.

But like the water that keeps dripping on a stone, they finally wore down the immovable. Overnight, it seemed the rules changed. What was revolutionary thinking at the time is now an every day expectation of diners.

It was a sign of how far we’ve come that umbrellaed tables and chairs recently appeared on the sidewalk in front of the Green Beetle, a more than 50-year landmark on . There were health hazards to be had there in the past, but they didn’t come from the food. It was the kind of hangout that even newspaper reporters refused to brave.

The grizzled guys at the bar looked like they might punch you at any moment, the bar was so dark that you ordered a drink whenever a shadow of a bartender moved, the cursing at the back of the place substituted for a juke box and an air of menace was as dependable as a Holiday Inn room.

But times have definitely changed. New owner, Andrew Davis, is creating something altogether different – a friendly destination known for its down home food and hospitality. To top it off, the tattoo parlor just north of the Green Beetle has now added tables and chairs of its own.

Even Thomas Boggs and Mike Warr might agree that the revolution they started may finally have just gone too far.

The Economic Benefits Of Small Changes