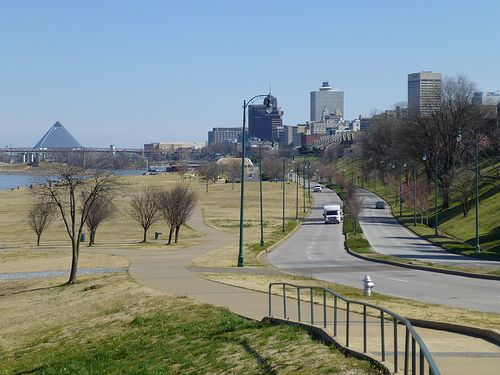 Thumbnail: Memphis can be a leader in a movement that downsizes or removes waterfront streets to improve quality of life.  Downtown Commission’s Master Plan calls for a reevaluation and a possible road diet for Riverside Drive.

So says the Downtown Memphis Master Plan.  And it says more:

“A number of Downtown Memphis streets are too large, given their traffic volumes.  Reducing the number of lanes would pave the way for public realm improvements while maintaining traffic flow…Some streets should be evaluated and considered for a road diet include: South Fourth Street, North Manassas Street, North Dunlap Street, Riverside Drive, Monroe Avenue.”

There is much to like in the proposed master plan for downtown, particularly the fresh look at the number of lanes in streets, at whether they are pedestrian and bike-friendly, well-lighted, signed well, and connected to the riverfront.

As for Riverside Drive, the number of vehicles traveling the highway is 30% lower than it was a decade ago, and today’s average daily traffic count is about only 13,000 on a street designed for 20,000.

Getting The Balance Right

With cities on the cusp of new transportation technologies, especially mobility-on-demand and the rise of autonomous vehicles, the report by the Downtown Memphis Commission emphasized the need to consider anew parking facilities and more efficient streets.

The recommendations about Riverside Drive are just the latest by experts that suggest Riverside Drive can be sized in a way that better serves the future aspirations of downtown.  That any suggestion that Riverside Drive should have its lane reduced, much less closed, provokes loud outrage and noxious comments by some people who seem more motivated by who is for improving Riverside Drive than about whether it is logical and better.

In addition, the loudest opposition comes from some people who are equally loud in their support for Memphis in May.  After all, the festival itself proves the practicality of a two-lane street during May when Riverside Drive is not totally closed to traffic.  It’s hard to understand the thinking that support for Memphis in May and a better Riverside Drive are in opposition

Unfortunately, the pilot program by City of Memphis in 2014 was poorly conceived and implemented, ignoring the configuration with on-street parking recommended by national experts Nelson Nygaard.  As a result, the yearlong pilot was destined for failure.

It’s About Quality of Life

For seven years, I’ve been blogging about the need to right-size Riverside Drive to improve downtown’s livability, to increase safety, and to improve access to the riverfront. After writing June 15, 2020, about this, I got a few emails that suggested that only Memphis would even think of doing something as stupid as changing its riverfront street.

And yet, that’s not true.  There are cities all over the U.S. who are rethinking their waterfront streets and highways to the point that many are even removing them altogether, because in taking a traffic engineering view of cities, the urban fabric was sacrificed for speed and commuters.

As urban planner and author Jeff Speck said, after evaluating the riverfront in Memphis in 2013, said: “Don’t let traffic engineers determine your quality of life.”

As Mr. Speck has written, connectivity is the lifeblood of a high-functioning city, and many streets regularly disrupt the connectivity while adding noise and pollution.

Boston removed sections of I-89, creating more than 45 parks and public plazas, and rerouted I-93 to create a linear park with landscaped gardens, promenades, plazas, fountains, art, food trucks, farmers’ markets, carousel and specialty lighting.  Public space, walking and biking paths, and new transit routes are now where the Embarcadero Freeway in San Francisco once stood.

Rochester, New York, filled in almost a mile of I-490 to create a complete street that reconnected neighborhoods with walking and biking paths.  Milwaukee demolished an interstate and new development blossomed on both sides of a boulevard.

New Haven, Connecticut, demolished part of a highway and spurred new downtown development.  Philadelphia is removing concrete ramps of an interstate which obscured views of the river and built a cap over the interstate covered by an 11-acre landscaped park that is a walkable link from the Old City to the river’s edge.

The Price For Car-Centric Ideas

Powerful roadbuilding lobbies have imbedded its main talking point – “highways are economic arteries” – into the minds of politicians at all levels of government.  The proof can be seen in the sprawl of suburban and rural Shelby County which took county government to the verge of bankruptcy.

A variation of that mantra justifying more roads into the suburbs was that sprawl was actually “growth” when in fact, they were perpetuating – and subsidizing – a major and historic relocation of Memphians out of the city.

In this way, the county government that depended on the important support from Memphis for revenues and economic activity did in fact undermine its health on the belief that “all roads are good roads.”

Back to Riverside Drive, Memphis has an opportunity to be a leader in the treatment of its waterfront by right-sizing the street to become what it aspires to be – a safe, accessible connector between neighborhoods in downtown, South Memphis, and North Memphis and their riverfront.