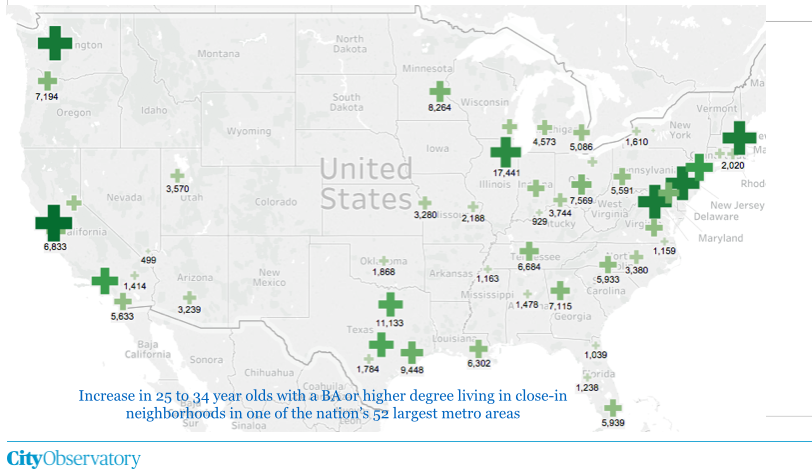 Thumbnail:  Young adults continue to fuel growth within three miles of U.S. central business districts, including Memphis metro, but we lag behind most cities rate of growth.

Joe Cortright of City Observatory continues to chart a key trend line for U.S. metros: the growing number of well-educated young adults in the most central neighborhoods.

He reports in “Youth Movement: Accelerating America’s Urban Renaissance” that the 52 largest metro areas all recorded an increase in 25 to 34 year-olds with a four-year degree living with three miles of the central business district.  Meanwhile, the rate of growth accelerated in four-fifths of these regions, including Memphis, when compared to the previous decade.

The good news for the Memphis metro is that the percentage of 25-34 year-olds with college degrees within three miles of the CBD has increased; however, the growth our region – particularly between 2010-2016 – lags behind most cities that are often used as comparables.

There’s no evidence that this powerful momentum has been blunted by Coronavirus concerns. In April, the market share of search activity for urban locations increased in 29 of the 35 largest US metro areas, while search activity for suburban locations decreased in all 35 of the largest metro areas, according to data gathered by Zillow. Independently, ApartmentList.Com reported an actual increase in searches for apartments in New York City, in April, concluding: “The pandemic is not scaring renters away from New York.” Despite pronouncements to the contrary, there’s no sign people are looking away from cities.

Smart young adults concentrating in cities: Well-educated young adults are three-and-half times more likely to live in close-in urban neighborhoods, which the report defines as census tracts within 3 miles of the center of a region’s principal central business district. The trend is remarkably widespread: The number of well-educated adults living in close-in urban neighborhoods increased in every one of the nation’s 52 most populated metropolitan areas since 2010.

In addition, the rate of growth of this key demographic in city centers has accelerated to a pace faster than the previous decade in four-fifths of these large metro areas. Slower growth in recent years is due to supply constraints.

While some analysts have noted a slowdown in central city growth, there’s little evidence that the “young and restless” are disenchanted with cities. If anything, its likely that population growth in these neighborhoods is constrained not by a lack of demand, but by a lack of supply: it’s been difficult to build enough housing to accommodate all those who’d like to live in these neighborhoods, with the result that rents have gone up. Some of the most popular cities for well-educated young adults—like New York and San Diego—have experienced slower rates of growth in the young and restless compared to the 2000-2010 period, most likely reflecting limited housing supply and rising rents.

Economic Development Priority: Get SW Tennessee on This List