The Wisdom of Toni Morrison 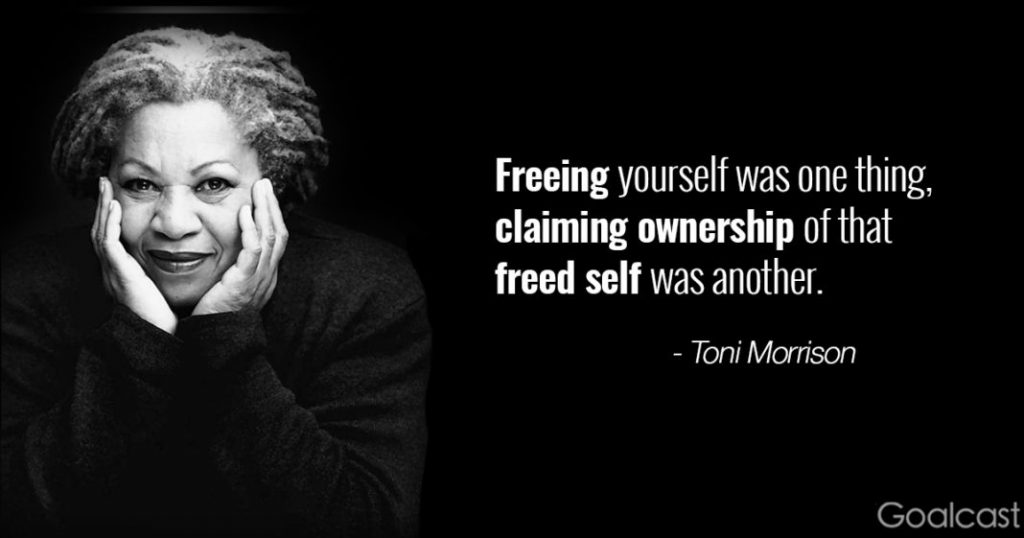 Eighty-eight year-old Nobel Prize winner and polymath Toni Morrison died yesterday.  She was a writer of great wisdom and captivating prose.  Some of her quotations are particularly relevant these days as our country comes face-to-face again with the hateful scourge of white nationalism.  That said, her words are always the north star and worth remembering day-to-day.  Here are some favorites:

“I tell my students, ‘When you get these jobs that you have been so brilliantly trained for, just remember that your real job is that if you are free, you need to free somebody else. If you have some power, then your job is to empower somebody else.”

“Freeing yourself was one thing, claiming ownership of that freed self was another.”

“In this country American means white. Everybody else has to hyphenate.”

“Anger … it’s a paralyzing emotion … you can’t get anything done. People sort of think it’s an interesting, passionate, and igniting feeling—I don’t think it’s any of that—it’s helpless … it’s absence of control—and I need all of my skills, all of the control, all of my powers … and anger doesn’t provide any of that—I have no use for it whatsoever.”

“You can’t own a human being. You can’t lose what you don’t own. Suppose you did own him. Could you really love somebody who was absolutely nobody without you? You really want somebody like that? Somebody who falls apart when you walk out the door? You don’t, do you? And neither does he. You’re turning over your whole life to him. Your whole life, girl. And if it means so little to you that you can just give it away, hand it to him, then why should it mean any more to him? He can’t value you more than you value yourself.”

“As you enter positions of trust and power, dream a little before you think.”

“I’m always annoyed about why black people have to bear the brunt of everybody else’s contempt. If we are not totally understanding and smiling, suddenly we’re demons.”

“There was something so valuable about what happened when one became a mother. For me, it was the most liberating thing that ever happened to me. Liberating because the demands that children make are not the demands of a normal ‘other.’ The children’s demands on me were things that nobody ever asked me to do. To be a good manager. To have a sense of humor. To deliver something that somebody could use. And they were not interested in all the things that other people were interested in, like what I was wearing or if I were sensual. Somehow all of the baggage that I had accumulated as a person about what was valuable just fell away. I could not only be me—whatever that was—but somebody actually needed me to be that. If you listen to [your children], somehow you are able to free yourself from baggage and vanity and all sorts of things and deliver a better self, one that you like. The person that was in me that I liked best was the one my children seemed to want.”

“I am a writer and my faith in the world of art is intense, but not irrational, nor naïve – because art takes us and makes us take a journey beyond price, beyond cost, into bearing witness to the world as it is and as it should be. Art invites us to know beauty and to solicit it, summon it, from even the most tragic of circumstances.”

“How soon country people forget. When they fall in love with a city it is forever, and it is like forever. As though there never was a time when they didn’t love it. The minute they arrive at the train station or get off the ferry and glimpse the wide streets and the wasteful lamps lighting them, they know they are born for it. There, in a city, they are not so much new as themselves: their stronger, riskier selves.”

“Did you ever see the way the clouds love a mountain? They circle all around it; sometimes you can’t even see the mountain for the clouds. But you know what? … The clouds never cover the head. His head pokes through, because the clouds let him; they don’t wrap him up. They let him keep his head high, free.”

“For lo, the winter is past, the rain is over and gone; the flowers appear on the earth; the time of the singing of birds is come, and the voice of the turtledove is heard in our land.”

The War on Christmas (Spirit)

It’s Not Presidents Day: It Still Belongs to George Washington