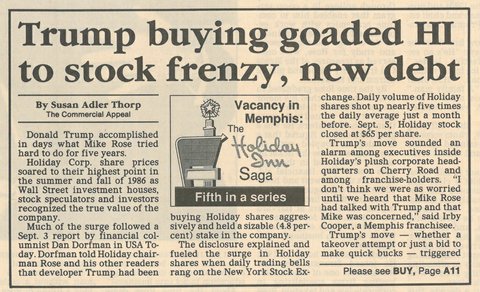 Twenty years before Donald Trump became synonymous with the words, “You’re fired,” 2,500 Memphians lost their jobs because of him.

For them, there was no reality television program. There was only reality itself, as Trump forced the sale of Holiday Inns in 1988 and the once shining example of American ingenuity became a British company whose U.S. regional office was in Atlanta.

While Holiday Inns is regularly cited as evidence of how Memphis innovators changed American culture, the Trump role is largely forgotten. The stock frenzy that he triggered when he bought about five percent of Holiday Inn’s stock in 1986 made him $32 million, almost the amount of the payroll – $40 million – that evaporated from the Memphis economy.

In classic Trump fashion, it was motivated by an opportunity to show up someone he didn’t like – in this case, highly respected Holiday Corp. CEO Mike Rose – and to show he was all about the “art of the deal,” the title of his boastful memoir published a year before the Holiday Inn sale.

“Trump had to have his name on everything…his ego simply requires him to be No. 1 or he can’t stand it,” Rose said at the time to Susan Adler Thorp, then a business writer for The Commercial Appeal and today a communications consultant and political commentator on WREG’s Informed Sources. Her six-part series, the culmination of a seven-month investigation, was nominated for the Pulitzer Prize.

A highlight of her legwork was a 90-minute interview that she and co-writer Ted Evanoff had with Trump on the 26th floor of Trump Tower on Fifth Avenue in New York City. A social acquaintance of Thorp’s, Stephen Bollenbach, set up the interview. Ironically, he was former CFO at Holiday Corp. but had been hired by the banks to direct a “financial workout” to avert looming bankruptcy for Trump.

“We were called into the boardroom, and it was the most beautiful view of Central Park anyone could imagine,” recalled Thorp. “There was the large model of an airplane at the window. Steve came in first, and then Trump came in. He had on a blue sharkskin suit and he had the same strange hairdo that he has today. He was cordial and answered all of our questions. He was very helpful, but I do remember he was full of himself. He sucked all the air out of the room and he let us know how important he is. He clearly thought there was a bunch of buffoons at Holiday Corporation who didn’t see what the real value of the stock was.”

Trump’s epiphany was the result of business dealings with Holiday Corp. in Atlantic City. The Memphis company had built a casino, but it needed land for a parking garage and the only available land was owned by Trump. “They entered into an unholy alliance,” said Thorp.   “They couldn’t stand each other.”   She wrote that as a result of the deal, “Trump came away with intimate knowledge of Holiday, a view that the company’s parts were worth three times the whole.”

Trump had discovered that the true value of Holiday Corp. was in real estate, and he started buying up stock.     Holiday Corp. officials “woke up to learn that he owned five percent of their stock,” she said.   “What struck me was by buying up the stock and forcing the sale, he had nothing but a careless disregard for all the people who lost their jobs at what was an American icon, not just a Memphis icon. He didn’t care. He was simply a ruthless businessman.”

To avoid a takeover attempt by Trump, Bollenbach, while still at Holiday Corp., had borrowed heavily to make lump sum payments to shareholders and ultimately engineered the sale of the company to the English brewery, Bass PLC. To reduce its debt, Holiday Corp. sold much of the company’s real estate in a move that mirrored Trump’s intentions.

Thorp wrote: “Holiday could market a brand name; Trump could admire his.” As for Trump, it was characteristically all about a deal, telling Thorp: “I don’t think I had any great intentions for the company. I made this deal. It was a very unfriendly deal.”

By the time the smoke cleared, this once proud chapter in Memphis’s legendary entrepreneurial history had come to an end, and employees were told the grim news that their jobs were gone.

In last month’s Super Tuesday Republican primary, Trump received the most votes in Shelby County. It’s a safe bet there weren’t any from former Holiday Inn employees among them.

A version of this article appeared in the April, 2016, issue of Memphis magazine.

oin us at the Smart City Memphis Facebook page for daily articles, reports, and commentaries relevant to Memphis.

The Image of Sugar Ditch Brought to the City