There is nothing as powerful as an idea whose time has come.

They say that often these days at The Urban Child Institute, because it seems that everywhere we look, people are talking about the importance and impact of early brain development. Truth be told, when TUCI began its efforts to spread the word, the folks there were unsure how successful it could be. After all, they were more accustomed to conducting research like the CANDLE study, writing policy briefs, and issuing the annual Data Book: The State of Children in Memphis and Shelby County.

And yet, they knew that we, as a community, had to act. In all of its work, it had become clear that few factors have as much impact on Memphis – present and future – than whether we can ensure that every child has a fair start in life, as measured by optimal development of his brain. Once we start following the ripples from this central principle, they take us from literacy to graduation rates, from breastfeeding to fatherhood, from domestic violence to toxic stress, from epigenetics to the return on investment for high-quality early childhood programs, and much more.

TUCI knew that in a sound bite world, making these issues high priorities in our community would hinge on whether Memphians were willing to become active advocates for the youngest Memphians. That’s why, 20 months ago in Perceptions, TUCI asked its readers and supporters to join us in cutting through the information glut, staying focused on what matters: our children, and sending the unmistakable message that every child is worth fighting for.

The response has been overwhelming, and TUCI reports that because of you, the science of early brain development is more and more moving into the mainstream. Recently, Leadership Memphis’ Executive Program devoted a substantial part of a day on early childhood development with an emphasis on social and emotional development. The day featured Dr. Hank Herrod’s always fascinating presentation on the science behind brain development and activities by the Early Success Coalition. Over at the New Memphis Institute, its recently revamped news magazine, Memphis Connect, which chronicles all things important to Memphis, regularly features early childhood issues. 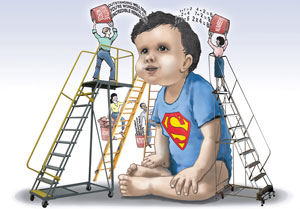 Meanwhile, early childhood development and school readiness are regular topics being discussed by our political leadership, particularly by those working to ensure that the new merged school district for Shelby County is known for its quality Pre-K-12 system. In addition, a number of local organizations and community leaders are discussing how they can create momentum for early childhood development programs.

The importance of our local conversation is being underscored at the national level. Highly-respected commentators like David Brooks (“The Psych Approach”), Nicholas Kristoff (“Cuddle Your Kid!”), Jonathan Cohn (“The Two-Year Window”), and Wendi Pillars (“What Neuroscience Tells Us About Deepening Learning”) have written about the importance of early childhood over the last few months.

In other words, there is no question that we are on the right track in Memphis and we should be proud that on the issue affecting the youngest among us, we are on the leading edge of cities. As we build on the momentum that we together have created, The Urban Child Institute will continue to provide the data, infographics, commentary, and tools like the Parents’ Guide (with its four skill areas: critical thinking, language and literacy, self-control, and self-confidence) to equip us with the information you need to speak up for children in our community.

Our recent public opinion poll showed that there is high awareness about the things that have the greatest effect on brain development: interaction directly with babies (87%); reading to children under three (87%); improving nutrition for children (86%), and improving nutrition for pregnant women (86%). Proving that they are willing to put their money where their opinions are, 56% of Shelby County residents said they support more public money being spent on brain development programs.

Our community is moving the needle on public knowledge about the importance of brain development. There is a growing constituency calling for more attention and funding so every child enters school ready to learn. Just as it is scientifically proven that brain development for our youngest children opens up better possibilities for their futures, Memphis today is proving that the only thing as powerful as an idea whose time has come are the people that advocate for it – and that is us, the citizens of Memphis and Shelby County.

A version of this post appeared previously on The Urban Child Institute website as part of its Perceptions series of commentaries.

Memphis Sprawl in a Time Lapse