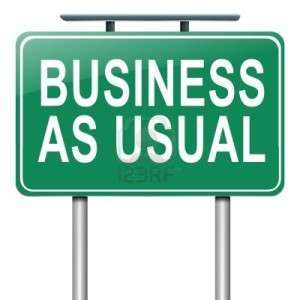 On the N20 outside Rathduff, Ireland, there is this sign: “Business As Usual.”

It’s the sort of slogan that doesn’t invoke positive impressions in this country, but it’s a sign that would have been just as much at home on the highway approaching Memphis and Shelby County.  For too long, our economic growth plans have been about business as usual.

It is evident in the crisis at Memphis International Airport, where the lack of any scenario planning, the dominance of insular thinking, and lack of serious public oversight produced average ticket prices in Memphis of about $510, the second highest in the entire U.S.

It is evident in the hundreds of tax waivers handed out to anyone who could fill out the paperwork rather than confront the crying need to address the absence of a workforce that can compete for the jobs of the future.  It is evident in the entrenched poverty that keeps 160,000 people out of the economic mainstream, but which creates ready low-wage workers for the jobs that traditionally created wealth for many in the Memphis metro.

Evidence of the Usual

It is evident in massive infrastructure projects like I-269 with the potential to decimate Memphis, the heartbeat for the entire metro economy, and begs the question that the economic future of this entire region is building the economy from the inside out.  It is evident in the self-hypnosis that tells us that regionalism is good for Memphis although the data show just the opposite.

It is evident in the widespread lack of understanding about the importance of University of Memphis to the future economic success of our region and how Memphis will pay a heavy price for the state’s abandonment of higher education.  At a time when university research is driving economic growth in many cities and there is rich potential for the regional research collaborative here, state government talks a good game about economic growth while cutting the U of M budget.

Often, economic development plans here over the years have been the expected and built on the premise that the future is merely a projection of the present.  As a result, plans have been what some call “Chamber plans,” known for a lack of aspiration and more for their tendency to replicate the same goals from city to city.

All of this is why we’re hoping that the $350,000 economic growth plan to be commissioned by EDGE, our community’s new umbrella economic development agency, sheds the old-fashioned way of looking at economic opportunities and instead ushers in an attitude where we are not obsessed with competing with Mississippi but with competing in a global economy.

We Know What You Are, We’re Just Haggling Over the Price

Today, despite the presence of the inventor of modern global commerce, FedEx, we remain an afterthought – if thought of at all – in the future planning of international businesses.  Most economic measurements and indicators of economic competencies are not kind to Memphis, Shelby County, and the Memphis metro, and while the challenges are daunting, we make no progress as long as we are held prisoner to conventional thinking in the planning processes for our economy.

A few years ago, while participating in a panel discussion at University of Memphis, the question was asked about why our community has an economy built so much on low-skill, low-wage jobs.  The answer is obvious: The economy we have here is precisely the one that our policies and programs set out to create.

Our economic development strategies are too often caught in the commodity trap, stemming from our background as an agricultural center and continuing with our pride in being a distribution center.  Everything about our experience tells us that we’re about selling commodities, which is generally defined by a consumer making a decision based on the lowest price.

Because our tradition is with businesses with thin profit margins, our economic development culture is one with an aversion to risk-taking, which in turns undercuts innovation and entrepreneurship. Cities with commodity mentalities think they can grow their economies with low wages, low land costs, low utilities, and low taxes. In a commodities world, these are seen as the factors that must be controlled to keep prices down. They are often cited as justification for the tax abatements that we hand out to all comers.

It also creates a mindset in which we come to believe that all we have to do for economic growth is to reduce our taxes.  It’s heard often in the halls of city government when in fact, it is county government that is responsible for Memphians paying the highest cumulative tax rates in the state.

Since 1993, the City of Memphis tax rate has increased 34 cents.  Meanwhile, in the same period of time, the Shelby County tax rate has climbed $1.20.  And yet, it’s city government that is most criticized for making taxes too high.

That’s par for the course for city government.  For years, polling has shown that it doesn’t matter how taxes are being driven up, what scandals are driving headlines, and what problems beset our community, the blame comes to rest with city government.  That continues with complaints about the tax rate.

Here’s the thing: Nothing magical is suddenly going to happen if the city tax rate goes down.  Middle class families aren’t going to surge into the city nor will new companies appear on the doorstep looking for new opportunities here.

At the end of the day, the goal for the City of Memphis is not simply to reduce taxes, but to demonstrate the value in whatever that tax rate is.  After all, some of the cities that are most economically successful have high tax rates, but they provide the quality public services and invest in high quality of life that are incentives for business growth.

In this way, it’s not the tax rate itself, but the value that the public perceives from that tax rate that is an economic driver.

Cheapness is not in and of itself an economic strategy, and we’ve proven that over and over during the past 25 years.  At a time when we were selling our cheapness, cities like Nashville and Charlotte took another road: One that emphasized quality.

The Cost of Low Self-Worth

As a result, here, whenever we embarked on a project, we asked, how can we do this as cheaply as possible?  In Nashville and Charlotte, they asked instead, what can we do to set the national standard?

It’s part and parcel of why Nashville approved only five tax waivers over a 10-year period while Memphis and Shelby County granted an unbelievable 415 tax waivers.  For us, it’s testament to the power that a city has when it concentrates on quality.  Workers and the businesses that seek them have responded to quality while our community has remained mired in the bottom rungs of economic expansion with its fixation on cheapness.

In that regard, we can’t talk the talk of regionalism and fail to walk the walk.  But that inevitably happens when local officials overreact to Mississippi’s ability to waive income taxes for new companies that allows the state to lure them across the state line with large incentives.

Then again, what harm does it really do to Memphis and Shelby County for businesses like McKesson Pharmaceuticals to locate just over the county line in DeSoto County?  Surely workers from Memphis and Shelby County who drove to work there when it was in Southeast Shelby County can drive a few more miles to the present location.  Why not let DeSoto County bear some of the infrastructure costs of the regional economy for a change?  Why are we so obsessed with North Mississippi despite the fact that 75% of the jobs and 80% of earnings are here in Shelby County?

EDGE, with its new economic development plan, has the opportunity to usher Memphis into a new era of economic growth, and it begins by shedding old behaviors and creating a guide to the future that requires us to stretch to achieve its goals and to reinvent ourselves for a more competitive, more complex economy that is now global at its core.

This is Part One of posts on EDGE’s economic development plan.