Often the tipping points in our lives are neither expected or predictable.  They just happen.

That was certainly the case with the creation of the Delta Does Memphis Facebook group, which now has 4,153 members.  Only five weeks ago, it started with four people and the idea that we were tired of being victims and wanted to give Memphians a way to voice their concerns, if not outrage, about indefensibly high Delta Airlines airfares at our fortress hub.

But back to the tipping point.

Rather, the tipping point was reached on the approach highway to Memphis International Airport and being greeted with the honorary street sign for the Airport Authority chairman and his wife.  It sent the message that in the midst of widespread customer frustration, high airfares, a fortress hub, monopolistic price-gouging, and declining service, it was an honorary street sign that was getting the priority. 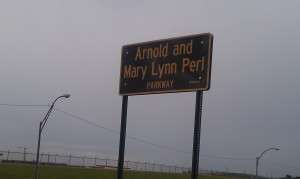 Later, we learned that although the initial irritation was directed at the Airport Authority, it was not involved in this designation.  The three signs lay outside of the footprint in which the Authority has authority and within the jurisdiction of City of Memphis.

If things aren’t confusing enough these days at the airport, the new honorary sign also creates a confusing array of signage on a highway whose official name is Plough Boulevard in honor of one of Memphis’ greatest humanitarians, benefactors, and entrepreneurs, Abe Plough.

Here’s how the Society of Entrepreneurs put it:

His story “began with a 16-year-old’s dream. In 1908, young Abe Plough borrowed $125 from his father, purchased a horse and wagon, and created Plough, Inc., selling homemade remedies to small-town folks and farmers around Memphis, Tennessee. His plan worked, and his long career was launched with a long stream of product innovations that led him to help build the company presently known as Schering-Plough Corporation, a research-based pharmaceutical and consumer product manufacturer, with such well-known products as St. Joseph children’s aspirin, Dr. Scholl’s foot powder, and Maybelline cosmetics.”

After his retirement from the company in 1976, he devoted himself to his philanthropy and the Plough Foundation today continues his legacy of charitable giving and his love for his city.  Sadly, the name of this larger-than-life figure in Memphis history seems almost a footnote on the highway approaching the airport today.  If you are driving from downtown and exit I-240 for the airport, you never even see a Plough Boulevard sign.  It’s posted behind you, north of the junction of the exit ramp and the highway.

It’s a sad commentary on our appreciation for the life of a man who wrote one of Memphis’ major chapters in business and philanthropy.  For all intents and purposes, the road’s honorary name will be seen by most people as its official name since the word, “honorary,” is in small print at the bottom of the sign.

To further confuse things, the Airport Connector Road from Plough Boulevard south of Winchester Road to the Airport was named Jim McGehee Parkway in honor of the Memphis-Shelby County Airport Authority Chairman Emeritus.  According to the Airport Authority when it approved the designation, the renaming of the roadway is “a lasting testament to McGehee’s contributions to the growth, development and success of Memphis International Airport. McGehee served as Chairman of the Airport Authority from 1981-1996. While he was chairman, McGehee helped set much of the airport’s infrastructure in place, including laying the groundwork for the two-mile ‘World Runway’ completed in 2000.”

It’s enough to make you wonder if finally Memphis has hit a saturation point with all these honorary signs.  We’ve written before about the confused group of Scandinavian tourists trying to navigate their way through a Memphis neighborhood with its multiple honorary street signs, but we’ll save the subject of sign proliferation for another day. That said, there is no better example of the confusion created by the overabundance of signs than the highway into MEM.

It’s further proof of a fact that we have made often on this blog: symbolism matters.  The symbolism of this honorary sign is negative to the Airport Authority in the extreme, and worst of all, it comes at a time when more than ever airport officials need to be assuring the public it serves that it feels its pain.

This Week On Smart City: Making Cities Work And Fun