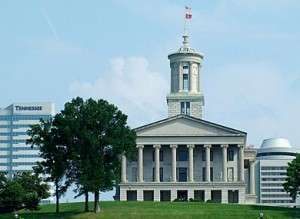 Just when you thought it was safe to get back in the water…here comes yet another stupid idea from a member of the majority of the Tennessee Legislature.

Building on the thinking that brought us guns in parks and restaurants, barriers to legal voting, anti-Muslim and anti-immigration rhetoric, anti-scientific teaching in science classrooms, and state interference in local school affairs, Tennessee State Senator Brian Kelsey has stepped forward with a proposal to handcuff local government with his narrow, right wing, partisan ideology.

His idea: to require that local voters approve at public referendum any increase in property taxes beyond 1%.  It is an idea that demonstrates how little understanding he has of government finances but then again, the intent is not to develop sound public policy but to throw a red meat issue to the hyper-reactionary constituency to which so many Tennessee legislators have sworn their oaths of fealty.

There are so many reasons that Mr. Kelsey’s proposal is inane, but chief among them is that if he is successful in blocking property tax increases, it only means that local government will dramatically increase fees.

If he is successful, it would also threaten the bond ratings for almost every local government in Tennessee because their high ratings are based significantly on the fact that local government has the power to increase property taxes at any time to pay off its bonded indebtedness.  With a series of downgradings by ratings agencies of local government, it is possible that they would affect state government as well.

In a news release, Mr. Kelsey said he’s pushing the bill because “residents deserve a voice in the decision to raise excessive taxes.”  The fact that 1% qualifies as “excessive” is proof positive that this is all about political pandering and nothing more.

Do What We Say, Not What We Do

Mr. Kelsey, as his colleagues have done on so many recent occasions, is willing to usurp the authority of elected officials put in office by local voters.  After all, if local voters are opposed to a property tax increase, they have the opportunity to act out their opposition at the polls.

But that’s when the real intent of this legislation – and others of its kind – is obvious.  It has an element of racial politics that seems to be a thread in several legislative bills.  When right wing politicians can’t have their way in their home communities where they are the minority, they try to mandate it with an end around.

It’s no small hypocrisy that the people leading the stampede on local self-determination are state politicians that have for years – before they gained the majority – decried big government and liberal intrusions into local affairs and claimed that the best government was the one where decisions are made closest to the people.

Turn About Is Fair Play

There is no era in state government history when the legislature has injected itself more into local decisions, whether to curry favor with the gun lobby or to cater to the prejudices of the lowest common denominator. In politics generally, we seem to have moved beyond the days when leaders appealed to the better angels of their supporters’ nature, but the Tennessee Legislature has taken the craven ratification of the basest instincts of its base to new extremes.

But a bill requiring a referendum on a 1.1% property tax increase is almost benign when it comes to Mr. Kelsey’s push for school vouchers.  It’s largely a gift for families that can afford private schools already and despite the rhetoric of the religious right in support of vouchers, the push for them is more about bashing public education because they are “religion free zones” and clinging to idea that prayer in schools could take us back to Ozzie and Harriet America.

In moving public money to private schools, the voucher advocates make it less accountable and transparent.  More to the point, private schools do not have the same standards and rules (often mandated by state government) as public schools.

Since Mr. Kelsey’s school voucher would set a specific amount of the private school subsidy that’s roughly half of what is spent on a Memphis City Schools student, it’s already obvious that it won’t cover the total cost, particularly when transportation and books are added.  More to the point, however, there are no definitive studies that show that vouchers are an effective way to improve education.

The Religious Right argues that it’s not fair that families with children in private schools pay taxes for public schools that they don’t use.  That said, we know a lot of Memphians who would like to quit paying taxes that fuel sprawl and enrich developers.  As for us, we’d like to quit paying state taxes that are spent by legislators on laws that are merely partisan distractions at a time when we need to be creating jobs and improving the Tennessee economy.

That’s why at the end of the day, the question is whether Mr. Kelsey is really trying to improve public education or to destroy it.  Then again, we assume that since he’s called public education “the last vestige of slavery,” we already know the answer.