Tom Lee Park is the worst riverfront park in the country.

That’s the comment made to Memphis City Council last year by Riverfront Development Corporation President Benny Lendermon, and surely, this is an RDC statement we can all agree to.  Rarely has such prime waterfront public realm real estate been put to such abysmal use in any city.

It’s unappealing in its largely barren state, and often looks more like cows should be grazing on it than joggers racing through it.  The public art looks like a speck  in the flatlands, urban design is AWOL and the park programming promised way back when the sliver of land along Riverside Drive was expanded to roughly 30 acres never materialized.

We can remember when some major downtown advocates talked about an expanded park animated with activities – outdoor vendors, concessions, kite fliers, visual and performance artists and even jugglers.  The only juggling that got done was the shift from its announced purpose as a signature public park to its present purpose as an events venue.

It seems to us that if other cities have found ways to enliven their waterfronts and turn them into magnets for activity, we should be able to do the same. 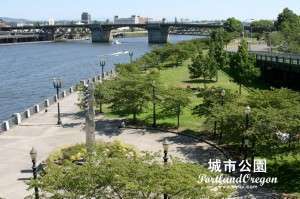 It seems to us that if we could show the initiative and the imagination to transform a large part of the Fairgrounds  from acres of asphalt to a dramatic sense of arrival at the new Tiger Way and adjacent parklike area.  Except for the weak name for the new greenspace, it is a bold testament to what can happen when the conventional thinking about a place is turned upside down.

More to the point, it’s what can be done when 10 event days don’t totally drive the ideas for a public site, and there are elements – light, water and concerts – that will give it life and potential to be much more than a tailgating site for football fans.  It even suggests potential to even have a Bryant Park type of environment if they right user services are added.

Meanwhile, we should take that same brand of fresh thinking to Tom Lee Park.  It needs something more than what it is – an unambitious, unexciting place that says volumes about our civic self-image and ambition.  Today you can almost count on your fingers and toes the number of trees on this site overlooking the most spectacular views in Memphis.

At a time when the RDC is developing a master plan for Mud Island and city government is thinking through a plan of connectivity for the waterfront, it seems an equally appropriate time to consider how an improved Tom Lee Park can fit into it.   Like the Fairgrounds, while we value the events that take place there, we just think that it should be a multi-purpose site.

We understand that some years ago, the RDC developed a plan to transform the park, but have been told by people who have seen the plan that it was not implemented because of the lack of political will to make it happen.  No one values Memphis in May International Festival more than we do, but we also know that they are ultimately motivated by what’s best for the city and there should be a some reasonable way to recalibrate Tom Lee Park so that it serves the festival and the city.  Truthfully, part of the impetus for Beale Street Landing was to offset and compensate for the uninspiring park to its south, and it will be unfortunate if this new hub of activity offering a sense of arrival to the riverfront is not bookended with a real park to the south.

Back to Memphis in May, after more than 30 years, most Memphians have forgotten the special role that the festival played in breathing life into a moribund city that national media had relegated to the junk heap of urban areas.  From a modest tea ceremony in Court Square, a small river symphony concert and aspirations and rhetoric that outstripped all reality, the festival brought together a new generation of leaders who weren’t interested in defining Memphis in traditional terms – race and money – and instead, saw a city that could transcend the increasingly embarrassing Cotton Carnival and create an annual ritual of hope for the future.

It was 1976, and the decline of Memphis had ended. Unfortunately, it was because we had hit rock bottom.

The economy languished; the Chamber of Commerce flirted with bankruptcy and its last campaign, “Believe in Memphis” had fallen flat; Beale Street was boarded up; downtown was on life support; Stax Records was shut down; and the closed Peabody hotel was a potent reminder of Memphis’ flagging confidence in itself.

Crisis Is a Terrible Thing to Waste

And yet, there’s nothing like a crisis to inspire new thinking.

As a result, young Turks conceived a new festival called Memphis in May. Other Memphians laid the groundwork for what became the Center City Commission. A small group began to talk about creating a new generation of leaders, giving birth to Leadership Memphis. City Hall fleshed out plans to buy and revive Beale Street. A new, improved Shelby County Government was launched, complete with its own mayor. A fledgling company called Federal Express picked up momentum after erecting its first drop box. Some civic-minded Memphians published the inaugural issue of City of Memphis, which became Memphis magazine.

Back then, Memphis was all about survival, and that’s why the most important milestone wasn’t a new program, project, or political office. Rather, it was an obsessive determination — equal parts faith and desperation — to fight for Memphis’ future.

It was a sense of urgency that is all too rare in the life of Memphis. Today, there’s less of a feeling that we are facing history-altering choices, but it remains no less true.

Memphis seems to be doing a lot right these days and there is power in symbolism in projects like Fairgrounds.  We’d love for Tom Lee Park to join it and as a symbol of the new spirit  and new thinking that’s taking grip in our city right now.  We think there are ways that Memphis in May can take a seat at the table and work with RDC and city government to create more reasons to visit the park and a better environment for experiencing the river.

Beale Street Landing has upped the ante for the riverfront, and it seems a good time to think anew about options for its future.  It starts with upgrading what we have if the phrase, world-class riverfront, is to be anything more than empty rhetoric.