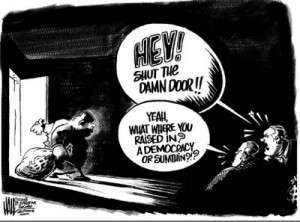 Anytime there is a choice in government between secrecy and transparency, it should be a no-brainer.

That’s why we hope that the Shelby County Legislative Delegation opposes a proposal to close some public records so companies seeking incentives would be happier.  The push by city, county, and chamber of commerce was cited in USA Today as an example of governments moving toward secrecy, and it’s ironic that it fell this week, Sunshine Week, an annual event calling for more openness in government.

There’s a reason that public records are called that: first, they are in fact the property of the public and second, they should always be open to the public.

Unfortunately, government often buys into the propaganda from the special interests that can never get enough in incentives and special privileges from government.  Just a few weeks ago, there was the suggestion that the law requiring the transfer of property to the Industrial Development as long as a tax freeze is in effect has a “chilling effect” on business recruitment.  This actually led to a recommendation to amend the state constitution.  Now, it’s imperative that we close some public records that contain proprietary information about companies.

We all agree that we have to remain competitive, but Memphis’s lack of worthiness and desperation for new jobs combine to create a risk to a healthy balance in our business recruitment.  Again, it seems like we’re majoring in minors while there are really relevant and fundamental issues that deserve attention to get our economy moving in the right direction again.  And yet, some would have us think that all of our problems stem from these pesky rules to protect taxpayers’ interests.

Like the axiom says, if you’re not willing to walk away from the table, you’re not really negotiating.  Economic development agreements have to be real negotiations, and as part of it, city officials have to stand firm on its principles: living wages, real economic impact statements (unlike those issued today),  and most of all, transparency with the public’s government and money.

Here’s the thing: these businesses are asking for us, the taxpayers, to waive our taxes.  We already have an unquestionable overuse of tax freezes here, which amounts now to more than $40 million a year in taxes that are waived, and with Electrolux, we’re even kicking in $44 million cash as an extra incentive.  This means that for the next 20 years, local government will be paying out more than $3 million a year to pay this debt.  In other words, we think that we already have a business-friendly government, but that doesn’t mean that we have to do everything business wants.  In this case, economic development officials want the “proprietary records” of the businesses to be closed to the public, but this is like going to the bank and telling the bank what its policies ought to be.

If companies want us to waive our taxes and to give our tax money as incentives, it’s not up to them to make the rules of the game.  We own the bank, and in this case, it is a public bank, and everything the bank has is ours – and it is public.

All in all, this feels like a false crisis.  Companies have been submitting information to government for decades, and if this hasn’t come up before, it’s hard to understand why it’s such a crisis now.  There are ways that government has always dealt with these issues, and there are simple ways to protect the names of prospects and information that is considered proprietary.  There have been numerous meetings over the years when information was passed around in government board rooms and taken back up when it ended.  There’s been information shared with government officials in meetings at the Chamber, which keeps the documents because it’s not covered by the public records act. There have been numerous meeting entries on mayors’ calendars that have been in code to protect prospects.

As a result, this feels to many like a solution in search of a crisis.

If there is any theme these days that resonates with taxpayers, it is that we own government, its job is to serve and protect our interests, and we all want government to be more open and transparent.

It may sound benign to ask that local government can hide “proprietary” business information from the public, but it’s hard to imagine that the public trusts a bureaucrat’s definition of what is proprietary.  Instead, we predict conversations in which companies ask to shield all kinds of information and economic development officials, in a rush to curry favor, will be loathe to deny them.

Supporters of the change in the law claim that Memphis and Shelby County Government only want to mirror similar exemptions that exist in in Tennessee law for state economic development officials.  We hardly hold state government as the paragon of transparency or openness.  It’s a rare year that someone in Nashville doesn’t suggest that some public record is hidden from the public – most recently, the names of people with gun permits – or watering down the public meetings law.

We think President Barack Obama got it right when his first executive order was about transparency and accountability.  The President said: “For too long, the American people have experienced a culture of secrecy in Washington, where information is locked up, taxpayer dollars disappear without a trace, and lobbyists wield undue influence.   For Americans, business as usual in Washington has reinforced the belief that the government benefits the special interests and the well connected at the expense of the American people.”

The Driving Force In The Region’s Taxes, Quality Of Life and Sustainability – Sprawl

The Smell, A Bill Day Cartoon

How women can contribute more to the US economy