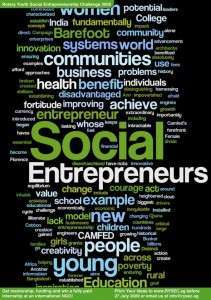 The most exciting things happening in Memphis these days aren’t in the halls of power or among the power brokers.  Instead, they are produced by a burst of entrepreneurship unseen here in 30 years

It shouldn’t be surprising that our city’s rich history of business entrepreneurship should be followed by an era of social entrepreneurs who measure success in social value rather than profits.  They see citizens as sources for solutions rather than as problems.  They also are not inspired by small-scale ideas but by ideas that can change Memphis.  Most of all, they don’t wait for City Hall or any other leaders for permission.

Signs of the Times

Signs of their work are everywhere.

What they have in common is that is that all would resist being given credit for any of these important projects, because they know their success came from many people.  It is this ability to rally others around their big ideas that characterizes social entrepreneurs most.  That and the need to scratch for money and beg for help that define a large part of their day.

That’s because unlike business entrepreneurship, it’s rare for their socially minded counterparts to find the equivalent of a venture capital fund to encourage them and help them along.  While a PBS special refers to them as “the new heroes” and universities research the best ways to create them, many of our social entrepreneurs admit that the harsh realities of Memphis grind many of them down before their ideas have a chance to prove their value.

It’s too bad, because their projects prove they are not mere dreamers.  They are intensely focused, they know how to develop business plans and ambitious strategies to implement their visions, qualities they share with business entrepreneurs.  What is different from the private sector is the limited access to money, and unfortunately, the general complacency in Memphis about the innovations that flow from them sends the message that grassroots opinion doesn’t count.

To counter that, Kirkscey suggested that a social venture fund “would open up a pool of entrepreneurs and attract the best and brightest who want to be part of creating a real, authentic, creative city rather than going into investment banking.”  For social entrepreneurs, he said, it’s about the same risk/reward ratio that business entrepreneurs use, because “altruism isn’t enough to keep people here if they can’t earn a living.”

He proposed that a social venture capital fund could set milestones and require business plans, designs, and goal posts for progress.  “Each time someone reaches a milestone, money could kick in,” he said.  “Seed funds just need to be a small amount that allows people to live while proving that they can reach the first goal post.  If they don’t make it, there is no more money.  If they do, they get funds so they can move to the second goal post, and if they reach it, then there is more.  There is no money without progress and success.”

Ed Glaeser, Harvard University economics professor and Director of the Taubman Center for State and Local Government, told Leadership Memphis recently that the smartest thing that a city can do is to find, develop, and attract smart people and get out of the way.  That advice applies to entrepreneurs wherever you can find them, he said.

To quote Kirkscey: “People doing socially beneficial things should get paid for their work.  Otherwise, we have perverted the incentive system and it does not reward people who want to create a good society.  Creative people, artists, and entrepreneurs all take risks, and together, we can make Memphis the Petri dish for creativity.  Now, many people feel like they are hacking through the jungle with a machete trying to find the way to a real, authentic city.”

In a city constantly in search of its brand, helping these social entrepreneurs succeed just might be the best one of all.