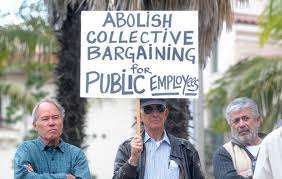 It’s that time of the year.  The budget process begins for government, and with it, the yearly ritual of beating up public employees to gain political points.

It’s the way to score an easy point for politicians, because no one in the public steps up to defend the job performance of their public servants.  To the contrary, the public is usually more than happy to kick the employees while they’re down.

It’s a commentary on the general public disdain for government workers that these budgets discussions are generally characterized more by their piling on than anything else.  Almost everyone has a horror story of the calls to the police department that are unanswered, rudeness from employees collecting taxes, workers reading magazines at their desks, and more.

The anti-government folks offer up horror stories of functionaries earning ridiculous salaries, although such examples are anomalies.  The public labor unions, meanwhile, treat government as a jobs program and that the payroll should never be cut.  This dynamic played out somewhat in Shelby County Commissioner Mike Carpenter’s timely suggestion that government policy on days off, vacation time, and “bonus days” needs to be updated and its largesse reduced.

It was met with familiar howls from both sides, and as often happens to moderates these days, he was caught in the vise of extremes and his common sense reform loses momentum.  By the way, bonus days are the extra days off that county employees get if they do what they are paid to do in the first place: show up for work without absences.

No matter what the subject about public employees, the underlying public opinion is that they make too much money.  It is misinformation, according to former U.S. Secretary of Labor Robert Reich, who argues that the scapegoating of government workers may be good politics but it is based on bad research.  He said the comparisons by anti-government leaders are apples and oranges, because they don’t compare public jobs with comparable private sector jobs with similar educational requirements.

The percentage of government employees with college degrees is twice that of private sector employees: 48% to 23%. Popular comparisons regularly fail to compensate for this difference in education and the higher salaries that are earned by college graduates.

The Economic Policy Institute in Washington, D.C., agreed with him in its report, Debunking the Myth of the Overcompensated Public Employee: The Evidence, written by Rutgers professor Jeffrey Keefe.  However, this study said the gap was less: about 4% higher in the private sector.

The study also finds that the benefits that state and local government workers receive do not offset the lower wages they are paid.  That said, public employers contribute 34.1% of employee compensation to benefits, while private employers’ contribution is between 26.1 – 33.1%.

The results of the study directly contradict statements by various governors who claim that a big part of their budget deficits are caused by the big salaries of their workers.  They are easy targets, and living in a world where politics dominates everything else, they have little option but to shut up and take it.

For example, former Massachusetts governor and presidential candidate Mitt Romney said that government workers are now making an average of $30,000 over private sector employees.  There is no study that shows this to be the case, and like so many hyperbolic politicians these day, he states it as a fact but never cites the source of his information.

Lost in all this rhetoric is the seminal fact that public employees are substantially more educated than private workers, and of course, higher levels of education are associated with higher earnings.

The truth is that while we’re allowing politicians to beat up employees for their political gain, we should demand that they instead do the hard work: developing a system of compensation that rewards performance rather than seniority, that encourages public entrepreneurship and innovative solutions, and that ties how much someone earns with how much they contribute to efficiency.

Finally, the big challenge is to attract talented young workers into public employment at a time when it seems so thankless and unrewarding, thanks to the harangues about government workers that have become customary in our lives.

A To Do List For Memphis Music That Helps Our Musicians