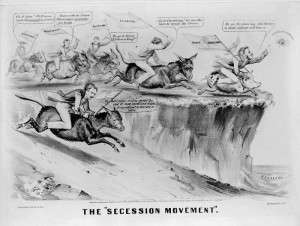 Shelby County Commissioner Terry Roland – who apparently has no ability to self-edit – has now suggested that his part of Shelby County should secede and become part of another county.

While we’re not quite sure why Tipton County would want the problems of Millington and Northern Shelby County to deal with, our immediate response to Mr. Roland’s idea is: “Please don’t let us get in your way.”

Almost every trend line in our community gets better if we can excise Millington from Shelby County.

We can’t wait to see this in action.  It will be the wake-up call that the anti-Memphis politicians of the suburbs need.  After all, any self-respecting boycott of Memphis should include trips inside the city limits to work.  Despite impassioned rhetoric suggesting that the towns can do without Memphis, the city remains the source for the vast majority of all jobs and economic activity in Shelby County.   That’s why roughly 75% of every town’s workers leave their city to work every day.

Northern Shelby County has waited a long time to get a commissioner from its part of the county, and despite what Mr. Roland thinks, his brand of country-boy, anti-intellectual politics really doesn’t play so well in Eastern Shelby County.   That’s one fact that escapes him as he continues his pandering to the tea partiers among us.

Down in Germantown and Collierville, the truth is that his shtick just doesn’t play as well.

Mr. Roland asked the Shelby County Attorney’s Office to provide him with an opinion on how to break off pieces of Shelby County to become part of other counties.  The request alone indicates his fundamental lack of understanding about government.  The county attorney represents the interests of Shelby County, and it would be a conflict of interest for her to give him any legal opinion that is detrimental to her client.

More to the point, we recommend that another member of the Board of Commissioners requests the county attorney’s office to develop a legal plan of action to block any secessionist impulses.  As we wrote recently, the county legal staff looked into this question more than two decades ago when some suburban firebrands called for the creation of Neshoba County.  The county’s attorneys identified ways to block any such actions that Shelby County did not want.

State law prevents the establishment of a new county that is within 11 miles of the Courthouse, which gives rise to the prospects of Agricenter International being designated as the Courthouse and therefore leaving only Millington, Arlington, and Lakeland for a new county or to be moved into another county.

Despite the machinations that could be undertaken by Shelby County Government to prevent creation of a new county, it’s hard to see a groundswell for Mr. Roland’s idea.

Most of all, we suspect that any supporters are unaware that they don’t get a free pass on taxes that they are likely expecting.  Tennessee law says the following: “The fractions taken from old counties to form new counties, or taken from one (1) county and added to another shall continue to be liable for their pro rata of all debts contracted by their respective counties prior to the separation…”

That’s one big reason we don’t think any counties will be lining up to take Mr. Roland up on his big idea.

Photos: What I Love About Memphis

Now Let’s Do Something About It