Ford Campaign Gets More for Less 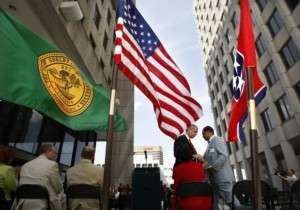 Between the televised debate with his opponent for Shelby County mayor and the pomp and circumstance of the announcement of $40 million for The Med, it may be the day that we look back and say, that was the day the Ford campaign started showing momentum.

We know that the infusion of badly-needed cash into our public hospital involved a lot of people, notably the Med staff and board, but the headline about the new money is nothing less than a boon for a campaign that has made the future of the hospital its centerpiece.

Good As It Gets

Voters remember images and headlines, and The Commercial Appeal front page photo of Mr. Ford yielding the dais with flags fluttering in the foreground was the kind of political ad that his underfunded campaign needed.  In truth, it’s hard to remember a person in a mayor’s office who has run a Rose Garden strategy as adeptly as he has.

With roughly less money in the campaign account as the cost of a full page ad in our daily newspaper, he has managed to keep his name in the news, positioning himself as the person who fights for the common man, whether that person is seeking help at The Med or that person is an employee worried about getting laid off in county government.

As we have pointed out previously, we disagree with Mayor Ford on a number of issues, particularly the lack of sensitivity to the tax inequities of Memphis taxpayers, but it’s hard not to be impressed with how much he has done with so little.

The announcement about The Med was a Godsend, because if funding continues, the Med’s financial perils are largely over.  The courage of Shelby County Government to put up $10 million earlier this year produced a two-to-one match from state and local governments.   The federal government will continue to match the new portion of Shelby County funds as the county continues to send them.

In other words, it gives new traction to Mr. Ford’s rhetoric that he’s saved The Med.

Future funding depends on a big if – renewal of the stimulus plan.  With the prospects of a Republican government, Republican Tennessee Legislature, and a Republican Congress, concern about urban issues may be short-lived or sacrificed on the altar of right wing political pandering.  But for now, Mayor Ford deserves credit for keeping his administration’s eye on the ball and fighting for The Med.

To punctuate the significance of the announcement, Mayor Ford said: “As long as I’m mayor, it (the funding) will be in there. “  If he had money for TV ads, that was his money shot.

Meanwhile, it appeared that he also managed to push his opponent for mayor, Sheriff Mark Luttrell, into the no column on consolidation.  The ability of the mayor to force the sheriff to oppose the merger had Ford supporters deservedly elated, not to mention that most political observers we asked think the mayor “won” the debate.

The idea that he could really get votes outside Memphis – even as the likable Ford – was wishful thinking, but his strategists knew the sheriff’s opposition to consolidation could hurt him where it matters to Mr. Ford – inside Memphis.  Incidentally, despite the instant analysis by the media who took Sheriff’s Luttrell’s position as a serious blow to merging our two governmental megaliths.  His position was inevitable and most of the people screeching for him to oppose the elimination of an entire government were part of the anti-consolidation crowd already, so they were never the ones who were likely to keep an open mind on the issue anyway.

It’s truly regrettable that at a time when we have the chance to blow up local government and start over, both candidates for county mayor are fighting for the status quo.  The voters deserved an election for mayor that was a referendum of this issue, and from many people we heard from today, they now have lost interest in this race because it is now politics as usual.  After all, as one said, don’t politicians always oppose anything that can shake up the system that gives they power?

It’s a good question, and as we’ve said before, it’s hard to find a statesman in our community.  Perhaps after the August election and with the wind at his back, the new county mayor will see a way to unite a county badly divided by race, party politics and suburban versus urban issues.

But back to the point of this post, it’s been a good week for Mr. Ford, and his modestly funded campaign yielded big dividends that just might end up being the momentum it needed.