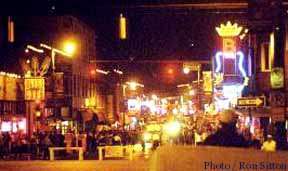 This could be Memphis Mayor A C Wharton’s “McChrystal moment.”

Sometimes, people step over the line, try to blur well-understood lines of responsibility and ignore common practice.  Sometimes, leaders have to draw a line in the sand and say enough’s enough.

President Barack Obama did it with General Stanley McChrystal.  Now, Mayor Wharton needs to do it with Memphis City Council Chairman Harold Collins.

Mr. Collins has written the mayor, telling him that the legislative body wants to spend $15,000 to review the Wharton Administration’s settlement with Performa Entertainment, long-time manager of Beale Street.

It’s essentially throwing good money after bad – City of Memphis spent almost $3 million on lawyers and accountants chasing Performa with little consternation shown by City Council – but that was then.  This is now, and the city charter makes it clear that this second guessing about a legal settlement is not within the Council’s authority.

Legislative bodies by their nature and by our form of government tend to push the limits of their authority and to blur the lines between the branches of government.  Often, it’s not worth the effort for the administrative branch to push back.

It’s worth it this time.  This review clearly crosses the line and injects the City Council clearly into the province of Mayor Wharton.

Line in the Sand

It’s time for him to draw the line.  The review is a specious notion regardless of who has the authority.  As anyone who has negotiated a difficult agreement knows, it is impossible to second guess decisions made in the highly charged atmosphere of legal negotiations.  It is also a feature of successful negotiations that there are things that each side may like and there are things each side may hate.  Nothing is so central to successful negotiation as compromise and horse-trading, and it’s easy to take a microscope to individual elements of an agreement and suggest it’s a bad settlement.

It’s just impossible to understand the give and take of the negotiations if someone’s not involved in it.  City Attorney Herman Morris and his staff were charged with reaching an agreement that was fair and equitable.  Already, some of the Council statements have misstated what street revenues are and how they were accounted for.

The Council wants to select the attorney who’ll get the $15,000 (we’re betting the number goes up).  In his letter to Mayor Wharton, Chairman Collins wrote: “This will provide, in my opinion, a sense of independence and give a level of confidence and comfort to the Council and citizens.  It is therefore important that we remove any suggestion that the attorney we select was chosen or approved by you to insure that the public perceives this as a truly independent review.”

We’re hard-pressed to imagine that the public is giving this much thought in the first place, but again, it’s the mayor’s legal authority to appoint attorneys, so again, we hope Mayor Wharton will just say no.

John Elkington played his trump card weeks ago, and after several years of innuendoes, rumors and charges, it’s hard to conclude anything except that he won the high-stakes game of money and reputation that characterized the $6.4 million argument about Beale Street management.

One of Memphis’s most respected accounting firm, Watkins and Uiberall, shredded a $750,000 “forensic audit” by Parente Randolph, the Philadelphia firm hired by Memphis Mayor Willie W. Herenton, to prove that Mr. Elkington’s company, Performa Entertainment, owed the city millions.  In a letter to John Ryder, receiver for Beale Street Historic District, Bill Watkins wrote: “It is my professional opinion that Parente Randolph’s report is not forensic, is not an audit, and its purpose is hard to discern.”

In other words, the conclusions by Parente Randolph were directed by city government to justify preconceived opinions.  Those lawyers made more than $2.5 million as city government threw everything but the kitchen sink at Mr. Elkington to get him to fold and settle.

“After devoting more than 200 hours to this review, it is my professional opinion that Parente Randolph’s report is seriously flawed,” said Mr. Watkins in his letter.  “No money is missing.  All money in question is accounted for and no money has been misappropriated.”

There weren’t exactly people lining up in 1982 when Mr. Elkington was chosen to revitalize Beale Street.  Before and after photos paint a 1982 ghost town (all it needed was tumbleweed) and today, it’s a vibrant street that draws more visitors than any other tourist attraction in Tennessee.

At this point, it doesn’t sound like Mr. Elkington is expecting a thank you.  But it’s time to move on.

We’ve Had Enough Of This Homeless Crap, Literally

Shelby County Puts On The Ritz To Find Solutions