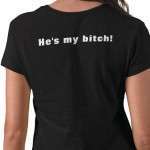 They are the NRA’s bitches.  And that explains why the gun-obsessed special interest group can talk to them like pimps.

The most cynical thing of all is that many of these people know that their votes to put guns in bars is stupid public policy, but such is the freedom that you give up when you agree to whore for the NRA.   Well, there are a couple of them whose age is higher than the IQ, but by and large, many of these legislators privately know that their gun-loving bills appeal to the extremists among us but such is the nature of politics today.

At a time when the public longs for leaders with courage and who can find the common ground and find the mainstream where all sides can unite, these are the kinds of politicians who seemingly care about nothing except themselves and staying in office.

That became blindingly apparent when the House Republican Caucus invited the NRA’s lobbyist into a meeting so she could threaten anyone who might put reason over rifles.  It was contrary to tradition and practice, but it graphically underscored the hold that the NRA has too many of our legislators.

The NRA stays in a constant state of outrage and bullying over any risk that the legislators it owns might lapse into a moment of logic.  Apparently, that’s why NRA lobbyist Heidi Keesling was dispatched post-haste to Nashville because a handful of legislators were thinking for themselves, always a grievous offense in the parallel universe that the gun lobby has created.

The sin: An amendment that would have said that people couldn’t carry guns into bars.  If that had happened, people could only have been able to carry their guns into restaurants.  Of course, all of this was allegedly to solve a problem that didn’t even exist but will now with the certainty of tragedy that flows naturally from the volatile combustion of bourbon and bullets.

Packing Heat on the Hill

We’re left with this question: at what point does the public good outweigh the personal ambition?  Apparently never.

When have you heard of an average citizen concerned about real issues get invited to speak to any legislative caucus in Nashville?  It doesn’t happen, and as a result, legislators more and more see us as a compilation of special interest groups that they can piece together as targets for the pandering that passes for politics so often today.

All things are possible when the NRA wants something.  Is anything out of bounds as a place where guns should be carried?  We’ve never heard it.

Are there any conditions that our state would put on places where guns can be taken?  Well, notably, the Legislative Plaza and the Capitol where this crowd hangs on.  If they are so convinced that guns are good, let them show it in the most convincing way – by letting us carrying our .45’s into their offices.

It’s All About Me

Just to recap.  What makes all of this so unbelievable – not to mention unforgivable – is that they passed the bill in the face of the opposition of the people who have to enforce it – the state sheriffs and police chiefs – and the people who know their industry best – the restaurateurs.

Their disregard for the experts in the face of overwhelming logic is testament to the phenomenon that invades government too much these days.

Nothing like common sense can deter this kind of political behavior, which becomes so outrageous, it runs the risk of being a parody of itself. It’s like the rest of us keep waiting for the grown-up to show up at recess and bring this childish group to order.

It’s tempting to put it all under the heading of absurdism and chalk it up to a plot worthy of Camus, but in truth, it’s pure, unadulterated nihilism. It’s taken to such a level that it’s become anomie as morality and it freezes out moderate people, the majority of Tennesseeans.  In worshiping at the altar of law and order, they are in fact breaking down law and order in pursuit of an “anything goes” attitude when it comes to their personal political ambition.

But enough of the diagnostics, the truth is that within the political context, their actions represent the devaluation of public service and the greater public good in pursuit of personal benefit. So often, the ones enacting these kinds of laws act as if they look down from Olympus and share their omniscient views with the mere mortals who elected them.

Then again, we can’t blame all this on the legislators.  We shoulder some of it ourselves, because we allow for the Tennessee Legislature to be the equivalent of a medieval court, where minor players gain power by doling out indulgences and approvals. They have created a world where their every lame attempt at humor is met with gales of laughter and every shallow idea is met with nodding heads from the palace guards.  It is a world built on the massaging of oversized egos and undersized commitments to public service.  Most of these benefits accrue to lobbyists who treat legislators as if they are invested with wisdom only reserved for the gods.

Thankfully, there are some (a precious few) legislators who maintain a modicum of humility and reality, asking, “how will the public benefit” instead of the more common refrain: “how many votes will this get me?”  This cadre of conscientious legislators forms a core of hope for change. Just as there are no greater critics of journalism than the journalists themselves, these legislators are deeply critical of the gnawing gap between the founding dream and the present reality of the legislature. As one, a non-Shelby Countian, summed it up: “This place is a definite idealism killer and spirit-sapping.”

Time for the Revolution

We’re not saying that at some level, every politician isn’t concerned about getting reelected. What we are saying is that too often today, from the U.S. Congress to the Tennessee Legislature, there are too many legislators whose only daily mission is to get elected – in granting favors in return for contributions, in passing gratuitous bills to satisfy their base and in being willing to divide us as a people in their own self-interest.

The good news is that if you miss your legislators in Legislative Plaza, you can also corner your legislators at local restaurants or bars around the Capitol. Just don’t forget to take your guns.

Mark Your Calendars for Thursday at 6 p.m. for an Important Discussion about Libraries’ Future