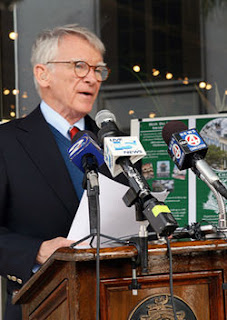 Mayor Joe Riley has been a great mayor for so long he’s often overlooked these days.

Few who see him would cast him as a political powerbroker. And yet, he has reshaped this city to such an extent that it’s essentially unrecognizable from the poor, racially torn backwater that had lost hope in the future in the 1970s.

No city – and its success – is more associated with a single mayor than Charleston, South Carolina. It’s not just that he’s been mayor for 34 years. It’s that he strides over the progress of his city like a force of nature, which is impressive for someone who embodies the highly-educated Southern gentleman.

These days, it’s hard to remember that he was a young Turk when he was elected, and that’s why it’s impressive that his energy for improving his city has never flagged and that his particular leadership for high quality public realm, built environment and the physical bones of his city continues unabated.

In a phrase, his philosophy is to pursue a clear vision while keeping watchful attention on the small details. And in this regard, there is nothing that escapes his attention, from creating neighborhood councils to selecting the materials for public improvements.

Mayor Riley vigorously turned Charleston around by obsessing on the strong sense of place that characterizes his city. He preserved the city’s historic qualities and improved them with new parks, developments and attractions in character with the classic 18th and 19th century architecture that is his city’s brand.

“You have a personal relationship with people. You pick up their garbage. You make them feel safe. You try to help them when they are in trouble. It’s a chance to do things directly for people—for the poorest person in town as well as the rich.”

When Charleston was hit by Hurricane Hugo in 1989, he ordered an all-out evacuation. Mayor Riley and city staff helped people to safety and they stayed behind to protect the city. Despite the massive destruction of the hurricane, he never looked back, giving birth to a program to make Charleston even more beautiful than before.

Once again, his attention to detail became his city’s competitive edge, because it again showed what distinguishes a good city from a great one.

Under his leadership, Charleston has seen an impressive decrease in serious crime over the past two decades, the city has been a national leader in innovative police practices, especially in the field of community-oriented policing.

Mayor Riley has championed public-private partnerships to stimulate new development and restoration in historic downtown Charleston, including the dramatic rebirth of King Street, Charleston’s main street, from Saks Fifth Avenue on King Street to the development of Charleston Place, a major hotel and retail shopping complex, to the creation of the award-winning Visitor Reception and Transportation Center.

Mayor Riley created Charleston’s Waterfront Park and pursues an ambitious plan to give the public access to the water’s edge. He led development of internationally known Spoleto Festival USA, Charleston Symphony, Charleston Ballet Theater, and his plans include a new symphony hall on the waterfront.

Early in his administration, he created the Office of the Ombudsman and meets monthly with small groups of residents to share information and discuss neighborhood concerns. In 1999, the mayor established an annual Neighborhood Presidents Roundtable, which brings all of the neighborhood presidents together to share success stories and to receive leadership training as well as information on city projects.

As Charleston’s historic core gentrified, Mayor Riley insisted that lower-income residents be part of the revival. Long before other cities began toying with new designs for public housing, Charleston was winning architecture awards for its scattered-site homes and even a transitional shelter for the homeless. Riley has always believed that low-income housing works better, both for neighborhoods and for the residents, when it doesn’t look like public housing.

Mayor Riley has no formal training in architecture or urban planning. He’s honed his flair for design simply by walking, observing and reading. It’s crucial, Riley says, for all mayors to master a few principles of urban design because so many blueprints come across their desks.

That’s why he established the Mayors’ Institute on City Design. In the past 18 years, some 600 mayors have attended two-day seminars where they discuss urban design issues facing their cities with experts and other mayors. They leave the seminars not only brimming with ideas for current projects but also as confident clients who know what to demand of architects and planners.

Mayor Riley has shaped Charleston in countless other ways. He diffused racial tensions by working closely with the African-American community and appointing the city’s first black police chief, Reuben Greenberg, who pioneered the concept of community policing.

When Hurricane Hugo slammed into Charleston in 1989, Riley won wide praise for getting the city cleaned up quickly and back on its feet. He managed to develop a robust tourist economy without turning Charleston into a garish theme park.

Riley snagged for his city the renowned Spoleto arts festival, which makes Charleston the world’s culture capital for 17 days each spring, and he is currently championing a plan to build the International Museum of African-American History.

As Riley seeks reelection to an unprecedented ninth term as mayor, it is also easy to see Riley as a living argument against term limits. Charleston is a monument to his consistent leadership and firm belief in the importance of civic space. “Americans spend a great deal of time on their homes — the front yard, the back yard, the private zone,” Mayor Riley said. “But the public realm, what all citizens own together, has a collective value that is essential to the quality of life of a community.”

His advice for improving quality of life and economic health of a city:

“”You need to make the heart, or center, of the city attractive, safe and lively. People help nourish and sustain the city. In the restoration of a city, you need to be sure that you restore that sense of people wanting to be active. It’s not just about the tax base or the jobs. What the top cities in the world have is a happy, active public realm-the arts organizations, festivals and events that allow people to celebrate their city and love their city.”