Digital Politics: What Has God Wrought? 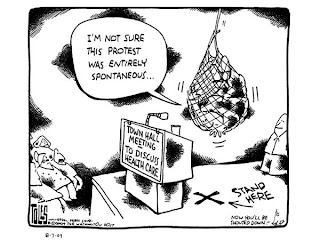 It was longer ago than I care to remember when a young and perceptive aide in the office of a U.S. Senator from Tennessee pointed to the newly-purchased piece of equipment in his Washington office, and said: “In the end, it will be our undoing.”

It was an optical scanning fax machine, and even then, pre-digital revolution, he could see the potential that has become a reality. It would lead to a time when we were no longer Tennesseans, but a collection of special interest groups.

Looking back, it seems like such a simple time, long before the digital tsunami would sweep away all vestiges of e pluribus unum and usher in the “it’s all about me” political constituencies. More to the point, it ushered in the era of politicians who willingly and often gleefully put their own political ambitions ahead of the public good.

It seems that today everything – and I mean everything – is about political advantage and talking points. There’s no issue that’s so crucial to the future of the country that it is spared from the partisan grand-standing that passes for policy debate these days.

Whether it’s the anti-tax Tea Party-goers, the birthers, or the town meeting health care hecklers on the right or the glib sloganeering and the social media self-organizing of the left, it’s just too little about creating consensus on important public issues and too much about shouting each other down.

Yesterday, it was Congressman Steve Cohen’s time in the bull ring, and predictably, a crowd of people showed up spouting Fox News’ talking points and the slogans from the well-heeled anti-health care reform lobby. Lost in the screaming yesterday was the chance to have a serious discussion about the health insurance plan moving through Congress with an expected vote in the fall.

Most of all, what was lost was the chance to make the reasonable point that the Congressional plan for health insurance coverage is flawed and inflationary. There’s plenty to criticize, but instead, it became a time for people to shout at each other rather than talk with each other.

It was also the latest evidence of the Fox News impact on the lack of civility in the public square. It is a disingenuous ploy (refined with the anti-tax Tea Parties and now sometimes duplicated by MSNBC) in which the news anchor asks a question, like, “If this health care plan is so good, why don’t Congressmen use it?”

Then, the commentators – some of whom are paid by the special interests they are commenting on – take up the theme for the day, and by the following day, there is inevitably an interview with a Congressman who feeds back the same question and belittles his colleagues for their alleged hypocrisy.

At that point, the question is also integrated into a viral campaign and people at town hall meetings parrot the message which in turn allows the channel to close the self-reenforcing loop by reporting that people are outraged at town hall meetings and asking why Congressmen aren’t covered by the health plan. There’s no mention of course that it was Fox News that stocked the fire and wrote the talking point in the first place.

It’s not that demagoguery and the politics of fear are sole province of the Far Right (although we do find it there to be an especially shrill and coarse version of it). It seems today that there are always people willing to play the fear card, and in a country with so many people unnerved by an African-American in the White House, with a transition under way that will make white males a minority and with the bombardment of self-serving sound bites, it’s a volatile situation waiting to explode.

Yesterday, it exploded on Congressman Cohen, who did as well as he could under the circumstances to create an environment where people could actually talk (the idea that some of the screamers were actually armed with pistols is too unnerving for words). It so clear these days that too many people – mainly testosterone-driven – are angry at a world they no longer understand and health care reform gives them the chance to vent.

A World Turned Inside Out

It is a frightening time for these people. Everything they thought was certain about their world feels like it’s been turned upside down. A black man is president, gays are getting married, a wise Latina woman is on the Supreme Court, health care insurance will change, white men will become the new minority and Latinos will transform the country.

But change is gonna come, and in this way, Congressman Cohen is on the right side of history. In some ways, it’s ironic that they feel that things are so out of control, because in more ways than his supporters ever expected, President Barack Obama has kept some abhorred Bush policies from secret prisoners to presidential signing statements.

In a country where disillusionment is the coin of the realm, it’s also a highly combustible currency, and most of all, it shouts down reasoned debate and reasonable discussions about serious issues that are crucial for our future. In other ways, it seems strange because although President Obama ran on the singular theme of change and as being the agent of that change, the cast of characters in the federal government seem depressingly old school, particularly those charged with our financial recovery.

While predictions of the demise of President Obama’s popularity are overblown, he finds himself standing on shifting sand, and he has to prove that he is truly committed to the kind of change that makes the American Dream real for every person in this country. There’s still the feeling that there are special deals for special people, and that even in the midst of a game-changing moment in history, some people such as bankers always seem to figure a way for the rest of us to pay for their mistakes.

Meanwhile, we are forced to endure some Republican opportunists, notably John Boehner and Mitch McConnell, who find nothing coming out of the Obama Administration – from rules about health care to ground squirrels – as socialism. Listening to their screed, it’s hard to condemn citizens who take the same kind of absurdism to the streets. For them and so many others, everything is measured in their political power and rarely about finding a consensus solution.

In the midst of the chaos on the national scene, it was a pleasure Friday to have lunch with the Washington and Memphis staff of Congressman Cohen at the FedEx Institute of Technology on the University of Memphis campus. It was reassuring that in the midst of the political wards, the congressman and his staff were focused on what matters most – the problems of Memphians.

Congressman Cohen has assembled a bright, well-informed team of legislative aides, and it was reassuring to hear their ideas for Memphis. It was a wide-ranging conversation – about Memphis’ challenges, trends and opportunities, about transportation, neighborhood redevelopment, road priorities, economic development, race, education and more.

They were inquisitive and committed to making the most of the opportunity to bring federal money to Memphis and to work with the new Memphis mayor to develop a shared city-federal agenda. That alone is reason enough to be optimistic.

For years, there have been serious missed opportunities because of the disconnect between City Hall and our Congressman’s office that long precedes Congressman Cohen. With the exit of Memphis Mayor Willie W. Herenton, we finally have the opportunity to see what the impact of a coordinated approach could be.