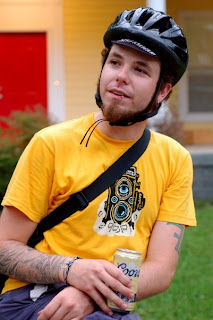 Anthony Siracusa is peddling, or pedaling, Revolutions abroad these days.

As the founder of Revolutions Community Bike Shop eight years ago at the age of 17, he’s been an ebullient advocate for cycling as the vehicle for civic engagement and progress in Memphis. Now 25 years old, he’s off on a year-long adventure exploring the way that bicycling connects and shapes a city’s character.

“Cities that promote cycling also are cities that seem to take care of their people and have great quality of life,” Mr. Siracusa says. “People are moving out of Memphis. We have to reconsider business as usual. It’s no longer a matter of whether cycling is a priority. It’s now a necessity. There’s not an option anymore, because this is about more than cycling. It’s about making Memphis a livable city.”

It’s hard to argue with his thesis about the connection between cycling, city livability and Memphis’ competitiveness. Bicycling magazine calls Memphis one of the three worst cities for cycling in the U.S. and cites the Walnut Grove bridge into Shelby Farms Park as the poster child for a “bureaucracy [that] has repeatedly ignored or rejected requests from bike clubs, shops, and other organizations for facilities.”
Not too long ago, bicycling summoned up images of a bucolic lifestyle not far removed from the past. Today, the bike-friendliness of a city is a “marker” for college-educated, 25-34-year-old professionals as they decide where to live and work.

Riding Toward The Right Goal

From 2000 to 2006, Memphis lost 14,508 people in this demographic, speeding up a skid that began in the 1990s with a decrease of 6,814. This is the age group determining if cities succeed in the knowledge economy. They are the most educated, the most entrepreneurial and the most mobile generation in history, and every city wants them.

And yet, despite frustrations and against all odds, thanks to Mr. Siracusa and others, cycling is moving quickly from being a group of enthusiasts to becoming a community of activists, and in doing so, they are becoming the active, vocal force for change in Memphis as it has been in other cities.

Today, Mr. Siracusa is in Xanadu, thousands of miles from Memphis and light years from our city in its biking culture and emphasis.

The question was provocative enough that Mr. Siracusa was one of 40 people awarded a fellowship from the Thomas J. Watson Foundation. It’s hard to think of anyone who’s more prepared to answer it. After all, as a teenager, he started Revolutions Community Bicycle Shop “to teach neighborhood kids how to fix bicycles while providing them with a safe space as they learn these skills.” “The program gives me a vent for two of my passions – promoting bicycling and working with troubled kids,” he said.

It’s this experience that finds him posing two fundamental choices – radical reform or patient integration. That exploration is also a purpose of his fellowship.

That pursuit begins today in earnest in Copenhagen, a city known for its extensive network of dedicated bike lanes with their own traffic lights which give cyclists a 10-second head start on automobile traffic. The city also operates a no-cost bike sharing system in its downtown – now that’s a revolutionary idea for the Center City Commission – but it’s also worth mentioning that the bikes are part of a comprehensive, effective transportation plan that includes one of the world’s best systems of public transit.

Mr. Siracusa said that compared to Memphis where one-half of one percent of Midtowners bike to work, in the entire city of Copenhagen, the percentage is about 50 percent.

Memphis’ potential to become a biking city is eroded by a local circular argument, with some people saying that people don’t ride bikes, so there’s no need to improve bike lanes and general biking conditions. Then, because the conditions aren’t improved, the number of people biking stays suppressed, which justifies the lack of attention to bike lanes.

As he has been for years, Mr. Siracusa is on the forefront of a revolution, as we were reminded in the recent interview on Smart City of Jeff Mapes, a Portland reporter who wrote, Pedaling Revolution: How Cyclists Are Changing American Cities.

“Portland really consciously designed a lot of its bicycle networks on things that planners, transportation people, bicycle advocates saw on trips to Europe and particularly to the Netherlands,” he said, adding that it begins with “a complete route for bicycles.”

“(It’s not) just enough to stripe a bike lane here or there or say, ‘gee, here’s a nice recreational trail’ but you really need to think out where do people need to go in this city…in the same way you would think it out if you’re planning a network for vehicle travel or for light rail or buses.”

Mr. Mapes also recommended that it is important to design “a city for being in the city instead of just rushing people in and out of the city as so many American cities do…I think that starts to create a bicycle-friendly city.

Mr. Mapes is right. It’s a lot more than just striping a bike lane, although around here, that would be considered revolutionary. Despite millions of dollars flowing into the city engineer’s office as a result of the federal government’s economic stimulus program, we predict that not $1 will be spent striping a bike lane although neighborhoods are pleading for them.

A year from now, after gathering the lessons from four continents, we’ll have our own expert who can help us create the kind of city that Memphis needs to be. Until then, we can keep up with Mr. Siracusa on his blog in anticipation of his impact when he returns.