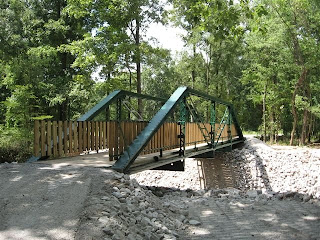 If the Sustainable Shelby project is looking for a symbol for its smart growth agenda, it can find in it in a most unexpected place – the Shelby County Division of Public Works.

After all, conventional wisdom is that government departments responsible for public works are project-oriented, asphalt-laying operations more concerned about responding to the needs of cars than people.

The county public works division is showing that there is another way. There, Public Works Director Ted Fox has engaged in the ultimate recycling project — putting a historic 1919 Shelby County bridge back into use in a wildlife area north of Collierville.

If there’s any single place that proves that the times indeed are changing, it’s Shelby County Government. There was a time when its agenda was largely driven by politically-connected developers, who used the county’s bank accounts to pay for the infrastructure for sprawl that made them millions of dollars.

These days, county officials are more likely to be talking about the development of smart growth strategies, sustainability agendas and controlled growth.

We’ve written before about the application of some smart growth principles to county road design by county engineer Mike Oakes, about the adoption by Shelby County Mayor AC Wharton of the context sensitive design process to resolve the long-simmering dispute about the highway through Shelby Farms Park, and now, Mr. Fox adds his own example of a new ethos in county government.

That’s because his adaptive reuse of the old bridge not only is the poster child for the importance of recycling, but it also addresses the need for quality natural areas, outdoor recreation, more hiking trails and historic preservation.

All in all, there’s no more peaceful place in Shelby County than the bridge over untroubled waters in the Wolf River Wildlife Area, because the nearby weir produces a soothing sound that could be easily mistaken for rapids.

Ordinarily, the 89-year-old bridge, which was replaced by a box culvert, would have been cut up and sold for scrap, but this time, it’s been reincarnated as the connection for the hiking paths in the scenic green space of more than 2,000 acres north of Collierville between Collierville-Arlington Road and Houston Levee Road.

The bridge fits perfectly in its rustic setting, and the best news of all is that Mr. Fox has two more historic bridges destined for reuse, perhaps next on Shelby Farms Park trails.

Much less known than its park neighbor to the west, Shelby Farms Park, the Wolf River Ecosystem Restoration Project is about half the size of the larger park, and while operating on a shoestring budget, it’s creating a spectacular place that will eventually feature 8.4 miles of trails and three boat ramps.

The area is the product of a $12 million partnership between Shelby County Chickasaw Basin Authority (which owns the property), Wolf River Conservancy (which holds the easement), Town of Collierville and the U.S. Corps of Engineers (which is providing the majority of the funding).

While we’re excited by the special wildlife area, the project also has stabilized the river and safeguarded the floodway and floodplain, and it will absorb peak flows during heavy storms and reduce potential flood damage downstream in Germantown and Memphis.

In the end, it’s a project that actually deserves the clichéd “win-win” appellation. It also leads us to take back our overly broad comments about engineers, because the Wolf River Wildlife Area proves convincingly that they are capable of creating special places for people rather than cars.

Education Under Siege and the American Dream