Harnessing The Young And The Restless 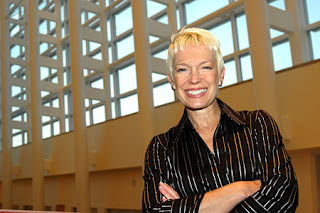 Our colleague Carol Coletta – now president of Chicago-based CEOs for Cities – recently spoke in Pittsburgh about the importance of young workers, a subject frequently explored here. There’s no one who understands this issue better nor explains it as well. Here’s a column that she wrote in connection with that presentation:
By Carol C. Coletta, President and CEO, CEOs for Cities
Over the past decade, America’s inner cities have benefited from market opportunities that 35 years ago were unimaginable. Chief among them is the desire college-educated 25 to 34 year-olds have in living and working in the heart of the city.
In 1970, who would have thought that urban revitalization would be pioneered by people with the option to live and work anywhere?
Cities, and particularly urban cores, are coming out of a long spell of being the pariahs of our nation to which blame was affixed for all ailments great and small. Urban poverty was worse than poverty. Urban crime was worse than crime. Even when urban advocates point out the fact that cities consume just 12 percent of the land mass in the U.S. but cities and the metro regions they anchor produce 79 percent of the GDP and 80 percent of the nation’s taxes, the argument has been largely ignored.
When CEOs for Cities produced solid research that the fates of cities and their suburbs move in lock-step over time, politicians and policy makers ignored that, too. They seemed determined to overlook the fact that cities drive the U.S. economy and that without strong cities there cannot be a strong America.
But then, something happened.
At first, it was just a trickle, represented by the fact that in 1980, 25-34 year-olds were 10 percent more likely than other Americans to live within a three-mile radius of the Central Business Districts (CBD) in America’s 50 largest metros. That trickle continued and by 1990, 25-34 year-olds were 12 percent more likely to live in close-in neighborhoods. By 2000, that trickle had become a flood, with 25 to 34 year-olds 33 percent more likely than other Americans to live within a three-mile radius of the CBD.
What’s more, this trend was present and increasing in every single one of the nation’s 50 largest metro areas. Add to that the fact that college-educated 25-34 year-olds are the most entrepreneurial demographic in the U.S., and it is easy to see why cities finally began to matter again to policymakers. To make our economy run, we need talented young people, and talented young people are showing a preference for cities.
Repopulating Inner Cities
What do young adults want in the places they live? In a nationwide study conducted with Yankelovich, CEOs for Cities found answers that may surprise. For example, 64 percent of young adults told us that they first choose the city where they want to live and then look for a job. And in choosing that city, the first factor they consider is whether a place is clean and attractive. Their second priority is finding a place that allows them to “lead the kinds of lives they want to live.” They also expect cities to be safe, green and have available the kinds of housing they want at an affordable price. Too, they want the places they choose to be welcoming and vibrant.
This market interest is a gift to America’s cities. Certainly, it would likely not have emerged if organizations such as ICIC, LISC and Enterprise Foundation, along with countless downtown management organizations, had not laid the groundwork of basic clean-up, safety, and revitalization. Nevertheless, the move by talented young adults to repopulate America’s inner cities has brought new energy, new money and new political and corporate interest to our cities. (These young adults have also brought along other new residents in their wake, most notably empty nester Boomers.)
But all the attention on college-educated young adults makes some long-time urban activists uncomfortable. They rightly wonder who is being pushed out and left behind. They worry about the growing gap between those with the education to negotiate their way into good opportunities and those without.
The good news is that today’s young adults are coming of age in a time when participation and creativity are taking on new meaning and being found in surprising places. In today’s worlds of culture and commerce—particularly the online versions—anyone with access to technology can connect and collaborate to create new ideas, products and ventures. Enabled by platforms like eBay, Google, YouTube, MySpace, and Facebook, today’s consumers are producers, too. They co-create. Their mass creativity has been transformed into value and impact.
What if cities could provide similar platforms that enable their citizens to make lasting contributions to their urban spaces and communities, to co-create on their cities’ behalf? Cities would not only be more attractive to creative young people seeking places where they can participate, but they would take full advantage of the latent talents of people often overlooked and left out.
Talent is not only about special people and special places, and creativity is not just for the elite. Rather, with the right platform, the right tools and distributed resources, citizens’ talent and creativity can be enabled as mass, self-organizing, collaborative engines for opportunity and advancement.
New and urgent challenges are changing life as we know it—an increasingly globalized economy, environmental concerns, the need for a far better educated citizenry, and exploding immigration, to name but a few. These are complex problems that do not lend themselves to old-style, top-down responses. Lasting solutions must motivate and enable people and communities to make their own changes.
The Mass Creativity Initiative

Fortunately, a new set of sensibilities and tools that are in a nascent stage of development can help urban leaders tackle issues with citizens, rather than for citizens. They include distributed skills and resources; co-created and collaborative solutions with users as investors, participants, and workers; strategies that capitalize on commons-based production; open leadership techniques; and frameworks that understand innovation as the orchestration of many different players interacting.

CEOs for Cities believes urban leaders who develop a deep understanding of this new approach to problem solving and can deploy the tools of mass creativity are in a superior position to succeed. For many of them, it will be the only way they can succeed. Working with Charlie Leadbeater, a world-renowned expert on mass creativity and a Senior Research Associate at Demos, CEOs for Cities is helping its network of urban leaders develop a new source of competitiveness for their cities: citizens and the dispersed talent that they embody.
From May 21-25 2007, Charlie traveled to four CEOs for Cities member cities—Portland (Ore.), Chicago, Providence, and Columbus—and met with a wide range of urban leaders to identify opportunities and hone strategies for enabling mass creativity. While each place presented unique challenges and offered distinct resources, on the whole, the trip revealed opportunities for cities to engage their citizens in new and powerful ways.
CEOs for Cities will soon publish a white paper detailing the results of Charlie’s tour, but these conclusions are already apparent:
* We need to think about problems in new ways. Schools are not the only place learning happens, and hospitals aren’t in business to deliver health. We must break away from our top-down, institutional focus to solve the thorniest problems cities face.
* Traditional systems are encrusted and difficult to reform. Existing infrastructure and bureaucracy lack the flexibility and agility to move at a pace required to meet the challenges we face.
* Comprehensive solutions will require engaging participants in new ways. Solutions are “out there,” not locked in current institutional structures and prevailing methods.
We are on the cusp of generational, social, and technological changes that will help make all of this a reality. Cities and their leaders can tap existing resources in order to enable mass creativity.
Cities, and particularly their core neighborhoods, have the potential to lead the charge when it comes to co-creation. It is certain that they face significant challenges, but they possess a significant resource in the way they bring different people together in different ways.
At the end of the day, the citizens of a city are its biggest asset. Disengagement is a myth: everyone is passionate about something, and cities have the unique opportunity to provide places and platforms for people’s passions to manifest in lasting gains for individuals and communities.

The Devil in the Details