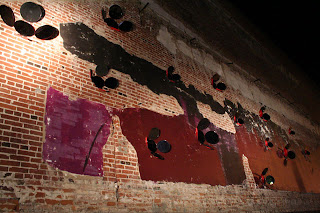 In pursuing that elusive quality – vibrancy – that regularly seems at the heart of successful cities, Memphis, like many mid-sized cities, searches often for the magic of big projects and major public investments.

The irony is that vibrancy often stems from small-scale, organic activities like those organized in Memphis by Lantana Projects.

Propelled by the goal of making art appear in surprising places, the group recently unveiled an outdoor art installation by 54-year-old Amsterdam artist Eric Knoote as part of a month-long residency in Memphis.

“From the Underground Up” was installed on the side of a building at a major downtown intersection, Main and Jefferson, and it features a number of mirrored flowers reflecting outward into the neighborhood.

It seems to symbolize Lantana’s approach to art – taking it to the street, producing “art-based events” rather than “art exhibits.” Recently, its members have even thrown in some “guerilla gardening” as they set out flower plants – what else but lantanas – to beautify previously dreary public space.

From artwork in new condos up for sale to the engaging “emerging artists show” and “Class of ’06” shows, complete with d.j.’s, Lantana is shaking up the way that people look at art. More than 1,000 people attended the “Clas of ‘06” show in two nights. Also, it maintains a lively blog on what’s happening in arts to make it more accessible and ubiquitous in the life of the city.

Working Without A Net

The young organization normally operates without a net – and precious little financial support – and yet, the energy and animation from its events pay big dividends for downtown Memphis.

Founded as a way to connect Memphis with cutting-edge contemporary artists from other countries, Lantana is now creating a virtual community for Memphians, particularly young artists, to talk about ways to achieve their goal of making “Memphis a city of vitality and creativity, and consequently, act as a magnet for talent.”

The international artists residency program remains the centerpiece for the organization, which refuses to yield in its belief that by tapping into international trends, they can also shake up their hometown and make it a leader in contemporary international art.

She shrugs off suggestions that in a city with a storied music history, it’s hard to find traction for Lantana. “Memphis can embrace its rich cultural history and still embrace contemporary organizations, because they are complementary, not incongruous,” said Elizabeth Lemmonds, Lantana Projects executive director.

These days, Lantana is trying to connect better with the community. “We want to reach out to other organizations and to all sections of the city,” said executive director Elizabeth Lemmonds. “We trying to align with the goals of the Memphis Manifesto Summit and show that art doesn’t have to go only in predictable places.”

She rallies a community of believers who pay attention “to what’s going on in other cities.” “If you say you want to be part of a global community, you need to pay attention to what’s going on in other places,” she said. “And you have to look for opportunities that are good fortune. Someone told us that a friend of his, a Dutch artist (Eric Knoote), was coming to Memphis. We approached him about doing a public project, a lasting piece at a visible downtown corner. It brought the community together. It was community-based and community-backed.”

Echoing the recent words of John Seeley Brown in a speech to Leadership Memphis, she adds: “If you want to be a leader, go to the fringes and see the people pushing things forward. They are taking chances. That’s what we have to do, too.”

Three Priorities for the Future of Memphis