A Lott Of Politics In I-69 Alignment 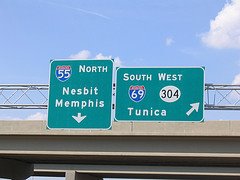 The road to hell may be paved with good intentions, but I-69 was paved with partisan, hardball politics.

Without U.S. Senator Trent Lott, “there probably would not be an I-69,” said Ken Murphree, former Tunica and Desoto County administrator, at the ribbon-cutting for the interstate last week. Mr. Murphree is the consummate professional, well-liked, effective and never given to overstatement.

However, on this one occasion, he clearly pulled up short. The truth is that without Senator Lott, there might in truth have been I-69, but there certainly would not have been the current alignment of I-69 and its attention to whose property it traversed.

Of course, we all know that there is no part of government as given to political pressures as highway construction. There’s big money being spent on roadways and big money being contributed to politicians. But it’s hard to imagine another project that has been manipulated as much for political purposes as I-69.

We’ve written previously (January 9, 2006) about the Tom DeLay Factor. As House Whip, he listened attentively and supportively to the rationale for the so-called NAFTA Highway. His response: the I-69 Coalition needs to hire someone to watch after critical Texas political interests, and who better than his own brother, Randy. The same suggestion was made to a coalition of Texas border cities along the interstate route. Together, the two groups shelled out about $800,000 for this special personal attention.

To DeLay’s rock, Lott played the hard place. From the beginning of the project, he was adamant about where the road would go through Shelby County, insisting that it circle around the county when logic (not to mention common sense) suggested a straight route through the city.

Time after time on this project, Lott refused to budget on the wishes of Tennessee politicians, doing the political equivalent of holding his breath to bottling up decisions until he got what he wanted. Each time, angry and tired, Tennessee politicians gave in, pressured as they were also by real estate developers longing wistfully for the circumferential highway to open up the green fields along the Fayette County line.

It’s a stupefying concept, but it’s rare for traffic engineers to actually make these kinds of decisions. More frequently, engineers are given the political answer and are told to prepare the engineering justification for it. If the lobbying arguments for the I-69 project were at times bordering on implausibility, the arguments for swinging the interstate wildly to the east as it passed through Millington defied good sense.

And yet, in the end, like water dripping on a stone, the political will in Tennessee weakened. The result: I-69 through Memphis, using the Midtown Corridor, and I-269, following part of Tennessee 385 around Shelby County before crossing slightly into Fayette County apparently so the highway can make the politically prescribed route through Marshall County and DeSoto Counties.

Over the years, the political motivations for the routing became so clear that it was actually dubbed with an influential landowner’s name in government circles. It was treated as a given that the reason for I-269 was as a political gratuity for an important Lott political contributor.

There were years when Memphis Mayor Willie W. Herenton and Shelby County Mayor Jim Rout resisted, and in fact, they angrily put their collective foot down, saying the highway would not swing eastward but go directly through town. Rout regularly quoted MS Carriers owner Michael Starnes as saying that no self-respecting truck driver would take a 40-mile tour around Shelby County when they could drive straight through the city.

Rout was particularly incensed by Lott’s arrogance, because as a Republican, he believed that he and the senator should be working together. Instead, Lott treated him as inconsequential and irrelevant.

The local politicians thought they had the upper hand, citing the Kentucky governor’s political canard: “I can’t say where it will go inside Tennessee, but I can damn well say where it will enter Tennessee.” That northern entry point was a political debate almost as contentious as the one here about where the road would enter Mississippi, and in the end, it was won by Kentucky interests because they had control over the entry point into Tennessee.

Bolstered by the Kentucky lesson, the local mayors believed that they could influence the Tennessee Department of Transportation in setting the entry point to Mississippi, and in this way, they thought they had the ultimate trump card in the decision-making.

They underestimated Lott. When he got wind of the strategy, he simply passed legislation that limited Tennessee’s options. Meanwhile, in hopes of bringing the increasingly hostile political discussion to an end, Mayors Herenton and Rout finally relented on a proposal to include both the through Memphis I-69 route and the circling I-269 alignment.

It was a compromise that added hundreds of millions of dollars in construction costs to the project, but in the end, Mississippi politics won and Lott dictated the alignment of the highway through Mississippi. And undoubtedly, his political contributions are better for it.

That is certainly true. There is still the section east of the recently opened section. There’s also still plenty of political contributions to be won with the rest of the Mississippi project, and based on the Shelby County experience, the engineers should just simplify things and ask for his political contributors list.

This Week On Smart City: CarrotMob And Eight Trends

Study: Traffic Congestion No Drag On Economies And Jobs Growth