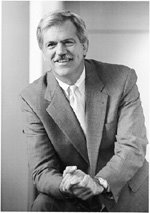 Paul Grogan, CEOs for Cities founder and president of the Boston Foundation, was our guest on this week’s “Smart City,” and the subject was civic leaderhsip. Paul outlined the direction he has set for the Boston Foundation to fill the leadership gap left by corporate CEOs who have been merged out of business.

This new approach to civic leadership has at least two benefits, according to Paul.

“I’m not saying this is going to be easy, and there is going to be a good deal of uncertainty associated with it,” he told “Smart City,” “but there’s also some excitement because let’s face it, not everyone thought that having the white guys in suits representing the big businesses should be in charge of private initiative. Now, we have an opportunity to have a much more open, inclusive and dynamic civic process if we can figure out how to organize it properly and bring the necessary force to the priorities that we have as a community.”

He explained how foundations can step up to a new and more powerful civic role. “We’ve changed our role considerably. We still make a lot of grants to superb nonprofit organizations across a broad range of issues, but we also commission a great deal of research on local and regional issues. We hold a large number of civic conversations, seminars, conferences, workshops of all kinds to bring people together to consider what’s happening in our region. And where we see an opportunity, we have catalyzed action groups, impromptu coalitions that agree to work on an issue together.

“It is permitting us to have intelligent conversation about what’s happening in the city and prompting us to develop consensus more quickly on where we have to act.”

Paul asserted the importance of what he termed the “distinterested leadership” role played by the foundation. “Most public policy questions are a contest of interests,” he said. “There are always interest groups that have a direct stake in the outcome of a particular policy or piece of legislation . Disinterested leaders are those who are outside that immediate circle of interests who have a broader view, perhaps a higher view, of what is at stake. The involvement of disinterested leaders can change the choices — and, I would say, improve the choices available to public leaders. A lot of the progress we’ve made in Boston has been because of the involvement of disinterested leaders who were able to change the equation, get a better choice and carry the city forward.”

You can hear the complete interview at

The 10 Regions of Tennessee, Part 2: Tax-Sharing