Let’s Not Be Dense About Density 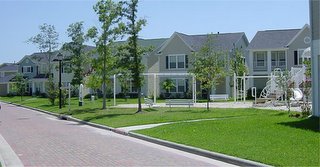 Here’s the mantra for Shelby County. Let’s all say it together: Sprawl is bad and density is good.

But if you ever wonder why high density has such a bad name in Memphis, it’s because some developers are just dense when it comes to it (see photo on bottom).

Prime examples of how prime real estate is squandered and reenforce the negative perceptions of density here are the housing developments north of Shelby Farms Park. Most incredibly of all, as the master planning process begins to transform the 4,500 acres into one of the world’s finest parks, the cookie cutter development continues.

On the agenda of the Land Use Control Board next week is the application for a 10.48-acre residential development that is the poster child for the bleak kind of development that gives density a bad name in Shelby County. Filed by Terransky LLC, it would essentially turn Raleigh-LaGrange Road into a private drive serving a development that is barren and brutish.

While there is nothing inherently wrong with 253 3,000-square foot lots, what is wrong with this one is that it is devoid of green space, it has no connectivity to adjoining neighborhoods or park trails, and it creates impervious surfaces that will exacerbate already problematic draining runoff in the area.

Expectations are that the staff of the Land Use Control Board will oppose the application, but as usual, the Board is expected to approve it. There was a time when the Land Use Control Board injected a voice of reason into the planning, zoning and development of Memphis and Shelby County, but long ago, this citizens’ board was captured by development industry interests, and today, it has trouble finding any development project that it cannot love.

The tipping point came in the late 1990’s when several homebuilders and relatives of homebuilders were appointed as members to the Land Use Control Board. In the space of a few years, the entire tenor of the board changed. The percentage of times that staff recommendations on planned developments were reversed more than tripled. In fact, in 2000, the year when their grip was tightened, the staff’s calls for rejections of planned developments were overridden 70 percent of the time. In that year, of all the planned development applications – 45 in all – filed with the board, a remarkable 42 were approved.

But the vision of a great Shelby Farms Park should eliminate business as usual. As the president of Friends of Shelby Farms Park so aptly puts it, the undeveloped land north of the park is “our beachfront property,” and it should reflect the highest principles of New Urbanism.

Density is of course the cornerstone of smart growth and New Urbanism (see photo on top), but it’s density that emphasizes connectivity, architectural integrity and open spaces. Fortunately, the consultants working on the new Unified Development Code for Memphis and Shelby County are embracing these concepts in their proposed regulations, and it can’t come too soon.

The proposed code has four kinds of subdivisions, and the higher density the more incentives and bonuses to developers. The way this works in other cities is that a developer who sets aside a prescribed percent of the units as “affordable” or sets aside a percentage for green space can receive a density bonus that allows more homes per acre. Also, in exchange for higher density, the governments reduce fees, expedite the review process, refund all county review fees and consider paying for landscaping. It’s unlikely that the code here will include these incentives, but thankfully, it is moving in the right direction.

With the help of the consultants, we’ll finally move beyond the knee-jerk reaction that equates density with traffic congestion, crime, lower property values and other problems. These misperceptions seem a direct link to negative feelings about traditional housing projects, such as Lamar Terrace, (which has been torn down and is being reborn as a mixed-use, mixed-income development that will be a model of this community).

If this isn’t enough to turn around negative views about density, the state of Shelby County’s budget surely is. Study after study reveals strong public support for limiting the sprawl that duplicates infrastructure and drives up crippling debt. What makes the new development code so important is that it will codify an emphasis on density, so that it does not become a passing fancy or a priority that fades with the changing of political leadership.

And speaking of perception, those of us who support New Urbanism and smart growth should adopt more expressive ways of describing our goals – walkable communities, sustainable growth and compact development, terms which have more positive impressions than talking about high density.

A few years ago, the Urban Land Institute convened a meeting to consider the benefits of high-density development, and this is what it concluded:

· Density adds support for local retail and reduces the need for car-driven errands.

· Density fosters a sense of community the old-fashioned, it-takes-a-village way, because residents are more likely to get to know their neighbors and shop in the area.

· Density fosters greater safety, because it creates walking and biking that are a deterrent to crime.

So, what does all of this mean for Memphis and Shelby County? It means that we should draw a line in the sand now, and send the developers of the tract north of Shelby Farms Park back to the drawing board. This is irreplaceable park frontage, and it needs to be treated that way.

Done right, it can become the model New Urbanism project for this community.

Done wrong, it will be an eyesore that will be with us for a century.

This Week On Smart City: Americans For The Arts

Time To Plant Support For GrowMemphis