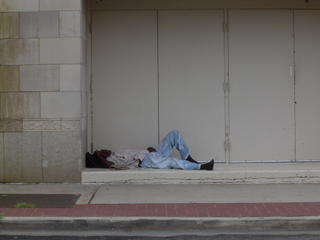 Elvis Week has come and gone, and the thousands of tourists have returned home, having left their cash in the local economy and left with memories for life. Sadly, the beggars that greeted them downtown when they arrived didn’t leave with them.

Instead, the man who’s been sleeping for days in the window casement on the Beale Street side of The Orpheum Theatre remains there. Based on the number of hours that he sleeps each day, hassling tourists during Elvis Week was hard work. Meanwhile, other downtown beggars have taken to bathing in the fountains in front of City Hall almost in the shadow of the Center City Commission, charged with making downtown Memphis a special experience for all of us. Then, there is the demanding panhandler who attempts to block cars traveling city streets, forcing them to give him money, and if denied, he smacks their cars with a stick.

In honor of these summer residents of downtown Memphis, we reprint our blog on this subject. It becomes even more relevant these days, particularly in light of what other cities are doing to control the problem. Atlanta’s new anti-panhandling laws passed resoundingly this week by the City Council and were supported by Mayor Shirley Franklin. Proponents of the law called downtown Atlanta “hostile,” because of the aggressiveness of the men and women who spend their days begging for money there.

Meanwhile, here, we act out the role psychologists would call “the enablers,” ignoring behavior that is objectionable and the warning signs for people in distress, people who deserve a helping hand rather than a handout.

Also, this week, Chattanooga received a $1 million grant to house 100 chronically homeless people who also suffer from alcoholism. Mayor Ron Littlefield says Chattanooga will be known as a “city of compassion” and address the root causes of homelessness and not just the effect.” One of those effects is panhandling, a perennial problem in downtown Memphis.

Either approach to deal with the problem is valid, and perhaps, Memphis officials can draw inspiration from strides being made in cities across the U.S. and do something to address this aggravating problem which diminishes the enjoyment of downtown for all of us.

Downtown workers and visitors would appreciate it. In fact, it’s something they are begging for.

It is officially summertime in Memphis. Flowers are blooming, the temperature is going up, tens of thousands of people flood downtown for baseball at the best minor league stadium in the country and the panhandlers are back in force. As reliable as the swallows at Capistrano, they reappear to wander through downtown, some in constant conversation (often with themselves), to sleep in an alley or two, to follow downtown residents they have come to recognize and to torment the poor, bewildered tourists their radar always seems to fix on.

Other cities seem to be making strides in addressing this nuisance. Gone are the homeless people living in cardboard boxes above grates outside the federal buildings of Washington, D.C., and even Jackson Square in New Orleans, once panhandlers paradise, is free of harassment.

Few cities have resorted to anti-vagrancy laws, which has the deserved stigma from its legacy as a weapon in the South to deprive African-Americans of their rights. A more measured response is anti-panhandling laws, especially when coupled with social services that prepare people for re-entry into society by finding them jobs and training and diagnosing and treating mental disorders

To set the record straight, this is not a problem with homeless people. The majority of them, probably less than five percent according to research, panhandle. Rather, it is an attack on behavior of a few who devalue and demean the common space that we collectively share, not to mention the smell of urine and worse that emanates from downtown parks and alleys in the summer. As the assault by one panhandler a few years ago against mental health advocate Nancy Lawhead reminds us, there are reasons to be wary. That is why Nashville’s new police chief made the fight against panhandling a priority. Cincinnati conducts a quarterly census and has passed laws against panhandling and for the removal of camping sites. Other cities that are actively addressing this problem include Little Rock, Atlanta, New Orleans, Austin, Orlando, Los Angeles and Las Vegas.

Back in Memphis, the word is out. There are panhandlers that come back to Memphis each year expressly because of its lax reputation and laxer enforcement. There is the man who regularly lives in Barboro Alley for the summer. There are the panhandlers who hitchhike back to summer in Memphis. There are the panhandlers who feel invincible.While there is the irritation to downtown residents that comes from the insistent begging, it is nothing compared to the discomfort that comes from watching a family from Spain or tourists from Denmark confronted by an imposing fellow who follows them down the street, talking loudly and with his hand in their faces.

With a tourism industry of $2.4 billion, it creates memories that do nothing to enhance the city’s reputation. But more to the point, it is more than a disservice to our guests. Most of all, it is a disservice to the panhandlers themselves. They deserve opportunities for to do better, and the first step is to get them off the streets so their needs can be addressed. Some say it is not compassionate to target them, but the sign of a compassionate city lies in offering these people the means to end their dependence on their skills as public nuisances.

A Quiz On Consolidation