This post is wrtten by Joe B. Kent, local researcher, who has a BBA with a Major in Finance from the University of Memphis and Masters of Science in Instructional Technology.

By Joe B. Kent

Perhaps residential PILOTs in blighted areas of Shelby County could be defended as an “administrative financial intervention” of sorts for a limited time frame but certainly not economic development.

This brings us to the most recent Economic Development Growth Engine (EDGE) meeting where $19M was abated in taxes to incentivize the residential developments of the Broad and Thrive projects both totaling approximately $73 million in new capital investment. This is $19 million more than any developer would get in abated taxes in any of the other 94 counties in the State of Tennessee and represents approximately 26% of the total capital investment of both projects. While in this case, we reluctantly accept the argument for the use of a short term local “administrative financial intervention,” 26% in abated taxes of the total capital investment seems not only excessive but obscene!

The table below explores the approved tax abatements and then what was not considered by the unbridled EDGE Board for the Broad and Thrive projects with columns for capital investment, project % abated, projected tax revenue, abated taxes and benefit to cost ratio. As for the benefit to cost ratio, the benefit is the projected tax revenue to be generated from the project and the cost is the abated taxes.

This lack of EDGE Board alternative consideration occurs in a brisk inner city real estate development market as recently reported by the Memphis Flyer in a reinvigorated non-blighted part of the City near East Parkway and Overton Park.  See below table:

While again in this case, we reluctantly accept the need for a short term “administrative financial intervention” to incentivize inner city residential real estate development, the analysis confronts the excess in the $19 million amount of abated taxes as shown above when the abatements for Broad and Thrive are added together. This excess points to the need for increased legislative oversight of tax abating Boards due to this EDGE Board’s lack of restraint in the use of its abating power. See below analysis

*  Had the EDGE Board considered and approved a 1.0 benefit to cost ratio, developers would have received an abatement of $10.3M more in Memphis/Shelby County than in any other county in the state while abating in taxes 15% of the capital investment and saving Memphis/Shelby County taxpayers $8.6M over what was approved by the EDGE Board for the Broad and Thrive projects.

*  Had the EDGE Board considered and approved a 1.5 benefit to cost ratio, developers would have received an abatement of $6.9M more in Memphis/Shelby County than in any other county in the state while abating in taxes 10% of the capital investment and saving Memphis/Shelby County taxpayers $12M over what was approved by the EDGE Board for the Broad and Thrive projects

*  Had the EDGE Board considered and approved a 2.0 benefit to cost ratio, developers would have received an abatement of $5.2M more in Memphis/Shelby County than in any other county in the state while abating in taxes 7% of the capital investment and saving Memphis/Shelby County taxpayers $13.8M over what was approved by the EDGE Board for the Broad and Thrive projects.

With decision-making and excesses like the $19M abatement for residential projects totaling $73M in capital investment, is there any confusion of why Memphis is falling behind its peer municipalities in economic growth with only a few big real estate developer winners?

This question is raised as the local Memphis press has yet to question the amount of this residential abatement thereby normalizing what appears to be a clear excess. This lack of vigorous questioning by the local press appears to be a pattern and a repeat of not questioning the local economic development complex and its excesses over the past seven years as evidenced in the EDGE retention PILOT program.

It must be stated in fairness to the advocates of residential PILOTs that new real estate development does increase property values, thereby increasing tax revenues. At the same time, during times of economic expansion, local governments use increased tax revenues from new construction to pay off debt and invest in true economic development efforts of safer/paved streets, improved workforce and public transit.

To that extent, residential PILOTs for all of Shelby County is just more of the same and an extension of the closed Memphis business culture where true economic development, external industry recruitment efforts, and support for the overall business community are sacrificed for the benefit of the few in the local real estate investment community. This is somewhat of a rerun of the fear-based and disproven retention PILOT program that benefitted corporations and yes, the real estate investment community, on the presumption that existing businesses were going to pack up and leave if their taxes were not abated. This persistent policy pronouncement appears to be a successful local brainwashing and culturally couched in the illusionary belief that real estate development is economic development, an illusionary belief that needs to be dispelled if Memphis desires to grow.

Given more of the same, we must put Mayor Jim Strickland, County Mayor Mark Luttrell, The City Council, County Commission and the entire Shelby County State Legislative Delegation on record in effect saying that the Broad and Thrive projects in what is now a thriving part of the City could not be constructed for any less than $19M in Memphis/Shelby County tax incentive dollars which represents 26% of the projects’ total capital investment.

After all the Mayors sign off on these abatements, the local legislative bodies oversee EDGE and the Shelby County Delegation had the residential PILOT provision that exclusively served Shelby County written into state law. With the exception of Terry Roland who recently squawked at residential PILOTs in Budget Commission Committee meeting, no other public official has gone on record objecting to this $19M amount for these residential PILOTs. This is as rhetorical concerns “to protect the taxpayer” are consistently heard from local elected officials. 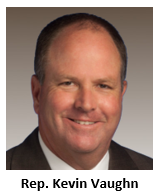 And, State Representative Kevin Vaughn (R-District 94, Collierville, Germantown, and part of unincorporated Shelby County) did not miss the opportunity for a touchdown dance at the recent EDGE meeting for his “state legislative accomplishment” as sponsor of the new Shelby County residential abatement provision.  Senator Brian Kelsey and Leader Mark Norris would have joined him for a team dance to tout the availability of yet another tool capable of further undermining the local tax base. After all, the new state law allows EDGE to make its own rules for the most part without, in the current environment, informed local legislative oversight, and to do it anywhere in Shelby County.

So how did this $19M amount come into being ? The calculation formula is not in the new state law or local ordinance. The abatement was set by EDGE using its tax abating authority which allows them in effect to promulgate regulation from written law which involves establishing economic modeling, “but for” financial justification and setting the amount and term for the abatement.  In the case of the Broad and Thrive projects, the Memphis/Shelby County Taxpayer is not even getting their money back while funding in abated taxes an obscene 26% of the total capital investment of the projects.

This all points to the need for increased informed oversight by local legislative bodies. The very oversight that has not happened in the past seven years with currently no scheduled Joint Council/Commission EDGE meetings on the calendar.

What is Economic Development?

According to economists Steven Sheffrin and Authur O’Sullivan, from their book Economics: Principles in Action, economic development is a community policy intervention endeavor with aims of improving the economic and social well-being of people. Or another definition, according to Jeff Finkle, CEO of the International Economic Development Council: “economic development is about creating places where people want to invest, work and live.”

Thus far, using responsible assumptions and a complete accounting methodology, we have proven that retention PILOTs are not economic development when abating taxes against existing tax revenue and claiming it as new tax revenue. This is a bogus practice and represents an approximate $250-$300M loss to Memphis/Shelby County taxpayers. This varies significantly from the approximate $600M gain that EDGE claims as part of their scorecard calculations.

We accept the above definitions of economic development and promote the idea of following the Amazon Road Map as advocated by The Memphis Economy at the University of Memphis. And now in this blog post, while reluctantly accepting the need for a short term “administrative financial intervention” in reasonable residential PILOTs for inner city development, we reject the excessive nature of the Broad and Thrive tax abatements while calling for local legislative oversight.

With this information and The Amazon Road Map, local legislators can rightly lead, craft and curate economic development planning and policy efforts that serve the entire business community and Memphis ecosystem for years to come.